Here are the video highlights of the 2010 kingfish tournament, sponsored by the Nassau Sport Fishing Association. 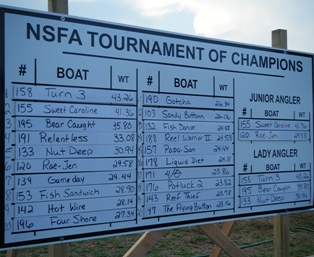 The 2010 kingfish tournament is over and there were just over 90 boats that participated in the two days of fishing to gain bragging rights and a boatload of prizes in the waters off of Northeast Florida!

The Nassau Sport Fishing Association sponsors this annual tournament that concludes with a fish fry on Amelia Island that is open to the public on Saturday afternoon.

In case you didn’t make it to downtown historic Fernandina Beach to see these king mackerel as they were brought ashore to be weighed in, here are the video highlights from this year’s Tournament of Champions, one of the stops for the Southern Kingfish Association saltwater fishing tour.