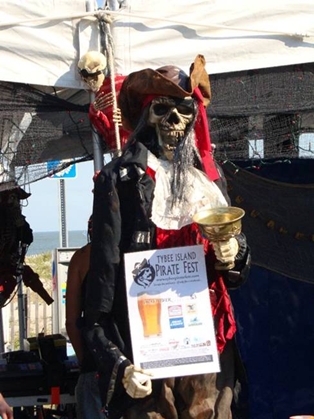 One of Tybee Island’s most popular events, the 6th Annual Tybee Island Pirate Fest was held October 8th – 10th. The Buccaneer Ball kicked off the entire three day event on Thursday evening, October 7th. Pirates from all over the country came to participate in the festivities that included costume contests, Pirate Victory Parade, Thieves Market, a petting zoo, a grizzly bear, and entertainment by Eddie Money and Drivin’ N’ Cryin’!

It seemed as if the entire island was involved in the festivities. Most of the businesses had signs welcoming the pirates to town and there were pirate souvenirs and booty everywhere. The festivities and fun, along with perfect weather, made for a perfect weekend to pillage, plunder, and pirate.

In 2005, The Tybee Island Pirate Festival was created as an event to help boost visitation to the island in the off-season months. The event has grown in popularity each year since and even received a top 20 designation in October 2009 from the Southeast Tourism Society. The event is always held on Columbus Day weekend and will be held October 7th – 9th, 2011.