BLENHEIM, Ontario – RM Auctions, the official auction house of the Amelia Island Concours d’Elegance, continued its record-breaking sales run in Northeast Florida over the weekend, posting a remarkable $24.3 million* in total sales with a strong 96% of all lots sold at its 13th annual Amelia Island sale to claim the top sales results of the weekend.

Building on the company’s strong track record in Florida, the impressive sales total represents the highest tally achieved in the event’s 13 year history, with over a 25 percent increase on the company’s 2010 sale figures. As many as 27 lots exceeded pre-sale estimates.

In total, the single-day sale presented 103 lots, including a selection of vintage motorcycles, before a packed house, with bidders in the room joined by those on the phone and over the Internet. Illustrating RM’s global clientele, bidders hailed from over 24 countries around the world, including as far away as India, Argentina and the United Arab Emirates.

“We are thrilled by the results from the weekend’s sale, which represent RM’s best performance to date at Amelia Island. The buyer population appears to be more well-informed than ever, recognizing quality when they see it. In addition, many examples at our Amelia Island sale were fresh to the market, coming out of long-term ownership. Collectors recognized the unique and rare ownership opportunities these particular lots presented, as was reflected in the prices,” says Rob Myers, Chairman and Founder, RM Auctions.

Top sales honors of the weekend went to a rare 1952 Ferrari 340 Mexico Vignale Coupé, chassis number 0224 AT, offered from the private collection of former GM designer and Ferrari Club of America co-founder, Larry Nicklin. One of just three built and boasting a superlative racing pedigree, the hugely valuable competition coupé sparked a spirited bidding war in the room and on the phones, exceeding its pre-sale estimate to sell for an extraordinary $4,290,000. Also offered from the Nicklin Collection and exceeding its pre-sale estimate was a highly original 1953 Ferrari 212 Inter Vignale Coupé, chassis number 0267 EU, which realized $660,000. Both examples were offered for the first time in 30 years. 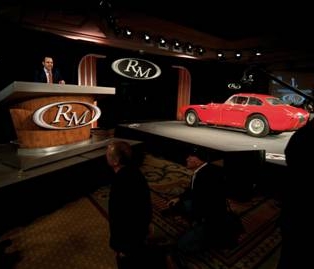 “The results are overwhelming,” said Mr. Nicklin following the sale. “I am thrilled with the prices achieved for my two Ferraris, both of which exceeded their estimates. It has been great working with RM – they are number one in every respect all around the world.”

Building on RM’s reputation as the specialists for private and estate collections, the distinguished collection of Jack and Marilyn Tallman also garnered significant interest. Spanning over 30 years of automotive design, the collection featured a wonderful array of early automobiles, many of which the Tallmans had owned for over 40 years and had enjoyed and driven in countless events, both at home and overseas. Headlining the collection was the sale of a handsome 1930 Cadillac Sixteen Roadster for $506,000 and a 1912 Packard Model 1-48 Custom Runabout for $407,000.

“We are very happy with the results from the sale of our collection at RM’s Amelia Island auction on the weekend,” said Jack Tallman after the auction. “It was a first-class event and a great experience. RM did an amazing job in the promotion and marketing of our collection to a global audience, and we highly recommend them to others looking to sell their collection or automobile at auction.”

In addition to the sale, RM Auto Restoration had a strong presence on the show field at the world-renowned Amelia Island Concours d’Elegance, with the beautifully-presented 1929 Duesenberg Model J Dual Cowl Phaeton owned by Charles Letts awarded ‘Best in Class’, and the striking 1960 Plymouth XNR Concept, displayed for the first time in 50 years in North America, also receiving honors. These latest accolades add to a string of awards received by RM Auto Restoration division in recent years, cementing its reputation as the world’s premier restoration facility for vintage automobiles.

Next up, RM kicks off its 2011 European auction calendar on May 21 with its debut sale at the celebrated Concorso d’Eleganza Villa d’Este. Held on the shores of Lake Como, Italy, the exclusive evening sale will feature an elite selection of the world’s finest motor cars, carefully hand-sourced from around the world by RM’s expert team of car specialists. Representing the ‘best of the very best’, some 30 automobiles – with an average value per car exceeding $1,000,000 USD – are poised for the auction block.

*Results are listed in USD and include 10% buyers’ premium.