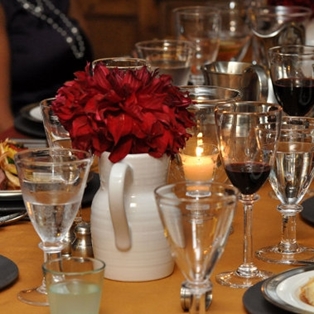 The evening’s events include a Silent Auction featuring items such as travel, wine, dining experiences and art. Proceeds from the Chefs’ Dinner benefit the Foundation’s organ donor education programs.

–Chef Jaime LeBlanc is Director of Dining Services and Executive Chef at Osprey Village. Previously he was he was Garde Manger Chef, Veranda Restaurant Chef and Executive Sous Chef of The Ocean Club in his twenty years at the four-diamond Omni Resort Amelia Island Plantation. He graduated Magna Cum Lade with a Culinary Arts degree from Johnson & Wales University in Charleston, SC. He has a Bachelor’s Degree in Business Management from Elon University in Elon, NC. Jaime has participated in the Katie Ride for Life every year since its inception. Wanting to take a more substantial role within the foundation, in 2011, Chef LeBlanc created the Chef’s Dinner for the benefit of the Katie Caples Foundation. It was a chance to cook in the kitchen with friends, bringing together Amelia Island’s top chefs in a celebration of locally sourced seasonal foods.

-Prior to being appointed Executive Chef at the historic Jekyll Island Club, Chef Dale Ford developed a passion in the culinary arts by working countless hours in his family’s restaurant in both Florida and Indiana. Dale then enrolled in the hospitality management program at Florida State College in Jacksonville, Florida. Chef Ford’s culinary journey has taken him through various kitchens to include The Grand Hotel in Mackinac Island, Innisbrook Resort & Golf in Tarpon Springs, Omni Amelia Island Plantation in Amelia Island, Trade Winds Island Grand in St. Pete Beach and most recently as top toque at the Kingsmill Resort in Willaimsburg, Virginia. To sustain his passion of local sourcing, Dale continues to be active in the slow food organization in his community. In addition, Chef Ford has partnered with the American Culinary Federation where he has been an active member for more than twenty years holding offices of Chapter President, Vice President, Co-chaired a regional convention and the Chef and Child Program.

–Chef Brennan Pickren is the Resort Outlet Chef and Chef at the Ocean Side restaurant at the four diamond Omni Amelia Island Plantation. With 11 years’ experience in the field Chef Pickren has been with the Plantation since 2009. After apprenticing with the American Culinary Federation, Chef Brennan began his career as a Cook at the Georgian Room at Sea Island Resort in St. Simons Georgia. Passionate and quality driven, Chef Pickren specializes in pastry, buffet design and Southern Cuisine.

–Chef David Berrian is the Executive Chef at Osprey Village. Formally trained in French culinary practices at the Cordon Bleu Culinary Academy in Orlando, Chef Berrian began his career as Sous Chef and Chef de Cuisine at Doc’s Restaurant in Orlando, Florida. Prior to relocating to Amelia Island, Chef Berrian was the Sous Chef at the Valdosta Country club in Valdosta, GA. Positions held on Amelia Island include Chef at Bonito’s Grill and David’s Restaurant.

Tickets are $125 per person, or you can reserve a table for eight for only $1,000 (limited availability).