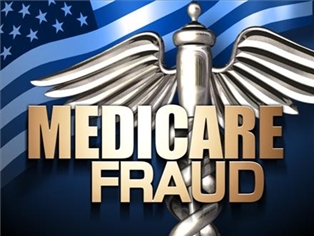 This coordinated takedown is the seventh national Medicare fraud takedown in Strike Force history. The Medicare Fraud Strike Force operations are part of the Health Care Fraud Prevention & Enforcement Action Team (HEAT), a joint initiative announced in May 2009 between the Department of Justice and HHS to focus their efforts to prevent and deter fraud and enforce current anti-fraud laws around the country.

Since their inception in March 2007, Strike Force operations in nine locations have charged almost 1,900 defendants who collectively have falsely billed the Medicare program for almost $6 billion. In addition, CMS, working in conjunction with HHS-OIG, has suspended enrollments of high-risk providers in five Strike force locations and has removed over 17,000 providers from the Medicare program since 2011.

The joint Department of Justice and HHS Medicare Fraud Strike Force is a multi-agency team of federal, state and local investigators designed to combat Medicare fraud through the use of Medicare data analysis techniques and an increased focus on community policing. Almost 400 law enforcement agents from the FBI, HHS-OIG, multiple Medicaid Fraud Control Units and other federal, state and local law enforcement agencies participated in the takedown.

“Medicare is a sacred compact with our nation’s seniors, and to protect it, we must remain aggressive in combating fraud,” said Attorney General Holder. “This nationwide Medicare Strike Force takedown represents another important step forward in our ongoing fight to safeguard taxpayer resources and to ensure the integrity of essential health care programs. Department of Justice will not tolerate these activities. And we will continue working alongside the Department of Health and Human Services, as well as federal, state, and local partners, to use every appropriate tool and available resource to find, stop, and punish those who seek to take advantage of their fellow citizens.”

“The Affordable Care Act has given us additional tools to preserve Medicare and protect the tens of millions of Americans who rely on it each day,” said Secretary Sebelius. “By expanding our authority to suspend Medicare payments and reimbursements when fraud is suspected, the law allows us to better preserve the system and save taxpayer dollars. Today we’re sending a strong, clear message to anyone seeking to defraud Medicare: You will get caught and you will pay the price. We will protect a sacred trust and an earned guarantee.”

According to court documents, the defendants allegedly participated in schemes to submit claims to Medicare for treatments that were medically unnecessary and often never provided. In many cases, court documents allege that patient recruiters, Medicare beneficiaries and other co-conspirators were paid cash kickbacks in return for supplying beneficiary information to providers, so that the providers could then submit fraudulent bills to Medicare for services that were medically unnecessary or never performed. Collectively, the doctors, nurses, licensed medical professionals, health care company owners and others charged are accused of conspiring to submit approximately $260 million in fraudulent billings.

“Today, across the nation, scores of defendants were arrested for engaging in hundreds of millions of dollars in health care fraud,” said Acting Assistant Attorney General O’Neil. “Among the defendants charged were 27 medical professionals, including 16 doctors. The crimes charged represent the face of health care fraud today – doctors billing for services that were never rendered, supply companies providing motorized wheelchairs that were never needed, recruiters paying kickbacks to get Medicare billing numbers of patients. The fraud was rampant, it was brazen, and it permeated every part of the Medicare system. But law enforcement continues to strike back. Using cutting-edge, data-driven investigative techniques, we are bringing fraudsters to justice and saving the American taxpayers billions of dollars. Overall, since its inception, the Department of Justice’s Medicare Fraud Strike Force has charged nearly 1,900 individuals involved in approximately $6 billion of fraud. We are committed to using every tool at our disposal to prevent, deter, and prosecute health care fraud.”

“We all feel the effects of health care fraud,” said FBI Assistant Director Campbell. “It leads to higher health care costs and makes it harder for seniors and those who are ill to get the care they need. The FBI and our law enforcement partners are committed to preventing and prosecuting health care fraud at all levels. But we need the public’s help. Take the time to be aware of fraud and call law enforcement if you see anything suspicious included in the billings to your insurance, Medicare, or Medicaid or have any unusual encounters with health care providers. We can work together to ensure your hard-earned dollars are used to care for the sick and not to line the pockets of criminals.”

“Fraud can inflict real harm on Medicare beneficiaries and CMS is committed to working with our law enforcement partners to get criminals behind bars and out of the Medicare program as swiftly as possible,” said CMS Program Integrity Deputy Administrator Agrawal. “Today’s actions represent further consequences for bad actors, many of whom CMS had already stopped paying, or even kicked out of the program. Fundamentally, this is about protecting the well-being of our beneficiaries and the investment of taxpayer dollars.”

In Miami, a total of 50 defendants were charged today and yesterday for their alleged participation in various fraud schemes involving approximately $65.5 million in false billings for home health care and mental health services, and pharmacy fraud. In one case, two defendants were charged in connection with a $23 million pharmacy kickback and laundering scheme. Court documents allege that the defendants solicited kickbacks from a pharmacy owner for Medicare beneficiary information, which was used to bill for drugs that were never dispensed. The kickbacks were concealed as bi-weekly payments under a sham services contract and were laundered through shell entities owned by the defendants.

Eleven individuals were charged by the Houston Medicare Strike Force. Five Houston-area physicians were charged with conspiring to bill Medicare for medically unnecessary home health services. According to court documents, the defendant doctors were paid by two co-conspirators to sign off on home health care services that were not necessary and often never provided.

Eight defendants were charged in Los Angeles for their roles in schemes to defraud Medicare of approximately $32 million. In one case, a doctor was charged for causing almost $24 million in losses to Medicare through his own fraudulent billing and referrals for durable medical equipment, including over 1,000 expensive power wheelchairs, and home health services that were not medically necessary and frequently not provided.

In Detroit, seven defendants were charged for their roles in fraud schemes involving approximately $30 million in false claims for medically unnecessary services, including home health services, psychotherapy and infusion therapy. In one case, four individuals, including a doctor, were charged in a sophisticated $28 million fraud scheme, where the physician billed for expensive tests, physical therapy and injections that were not necessary and not provided. Court documents allege that when the physician’s billings raised red flags, he was put on payment review by Medicare. He was allegedly able to continue his scheme and evade detection by continuing to bill using the billing information of other Medicare providers, sometimes without their knowledge.

In Tampa, Florida, seven individuals were charged in a variety of schemes, ranging from fraudulent physical therapy billings to a scheme involving millions of dollars in physician services and tests that never occurred. In one case, five individuals were charged for their alleged roles in a $12 million health care fraud and money laundering scheme that involved billing Medicare using names of beneficiaries from Miami-Dade County for services purportedly provided in Tampa area clinics, 280 miles away. The defendants then allegedly laundered the proceeds through a number of transactions involving several shell entities.

In Brooklyn, New York, the Strike Force announced an indictment against Syed Imran Ahmed, M.D., in connection with his alleged $85 million scheme involving billings for surgeries that never occurred; Dr. Ahmed had been arrested last month and charged by complaint. Dr. Ahmed has charged with health care fraud and making false statements. In addition, the Brooklyn Strike Force charged six other individuals, including a physician and two billers who allegedly concocted a $14.4 million scheme in which they recruited elderly Medicare beneficiaries and billed Medicare for medically unnecessary vitamin infusions, diagnostic tests and physical and occupational therapy supposedly provided to these patients.

A complaint or indictment is merely an accusation, and defendants are presumed innocent unless and until proven guilty.

To learn more about HEAT, go to: www.stopmedicarefraud.gov.