With incandescent bulbs on a Congress expedited way out, the Easy Bake Oven may be driven to Extinction. Long live LED. 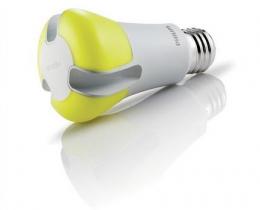 It looks quite cool actually

Okay so Sunday is Earthday and Philips uses the occasion to introduce a state-of-the-art LED light bulb with a $60 price tag.
Now I’m all for saving resources and giving mother Earth a break from our relentless rape effort to strip her, but come on, a light bulb that lasts a purported 20 years and costs $60, seems a bit extreme, or is it?

Quickly estimating the light points in my house at about 60, including bathrooms, garage and outdoors, I’m looking at an investment of roughly $3,600 to light up my house. Breaking it down over 20 years still adds up to $180 per year, so what could I expect to save on my light bill? Well that part is not entirely clear yet as the bulb is only advertised as the most energy-efficient yet, a claim being qualified by the fact that the 10Watt bulb produces 60Watts of light.

The 60 Watt was stipulated by Congress when it launched the L Prize contest in 2007 with the goal of creating a bulb to replace the standard, energy-wasting “incandescent” 60-watt bulb. The requirements were rigorous, and Philips was the only entrant. Its bulb was declared the winner last year, after a year and a half of testing. The contest stipulated that the winning bulb be sold for $22 in its first year on the market.

In that context, the $60 price tag has raised some eyebrows. Ed Crawford, the head of Philips’ U.S. lighting division, said it was always part of the plan to have utility rebates bring the price down to the $22 range.
Utilities already offer rebates on energy-saving products such as compact-fluorescent bulbs, or CFLs. In return for efforts to curb energy use, regulators allow utilities to raise their rates. The discounts are invisible to consumers – the utilities pay the stores directly.

It actually may be a good investment

For $25, or even $35, the bulb looks like a good investment compared to an incandescent bulb. It uses only 10 watts of power, meaning saves about $8 per year in electricity if it’s used four hours a day. It’s expected to last at least 30,000 hours, or 30 times longer than an incandescent. At four hours per day, that’s 20 years.
But the Philips bulb is not only up against $1 incandescent bulbs. CFL are nearly as energy efficient. They use about 15 watts for 60 watts worth of light. They’re much cheaper too, typically costing around $5. The Philips bulb might have to fight interior decoration perceptions as the light-emitting surfaces are yellow when the bulb isn’t lit, yet shine white when it is. And yes there are people who don’t like the color yellow to be part of their interior design – believe it or not!

The Philips bulb has some other advantages over a CFL: It lasts three times longer and gives off a more natural-looking light. It doesn’t contain the toxic mercury vapor inside CFLs, which creates a minor hazard when they break.

The race is now on to produce LED bulbs that produce 100 watts worth of light. The incandescent equivalents are no longer made or imported, victims of a federal ban that kicked in at the beginning of this year. They’re now starting to disappear from store shelves. Squeezing enough LEDs into a bulb-sized space to produce that much light is a big technical challenge – LEDs generate heat, which destroys them over time unless they’re well-cooled.

We don’t seem to have a choice but allocate future funds toward the purchase of LED bulbs since incandescent bulbs of 40 watts and above will be banned 20 months fro now. With a potential replacement price tag of $3,600 to $4,000 (I forgot the closets in my previous calculation) I wonder if light bulbs that last 20 years should now be treated as assets, require depreciation amounts on the balance sheet and if I should consider removing them when I move to another home. And what do I do with my Easy Bake Oven that requires the 100 Watt incandescent bulb?

Another consumer concern I have is the 20 year lifespan. Probably in another 5 years there will be a much more efficient light bulb, which in turn will then become a government mandated replacement and if I don’t comply, Google and Facebook would have capability to report me to the Authorities.

No doubt that somewhere in the catacombs of Washington’s underbelly, someone is working on answers to these questions in a modern version “fiddling while Rome is Burning”. Happy Earth Day!