A letter to the One Percent

The Ninety-Nine Percent have watched helplessly as you've shipped our jobs overseas and debased our currency to enrich your pockets. 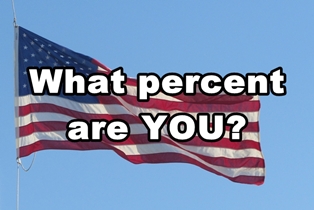 Now you’re hearing from that “irate, tireless minority keen to set brush fires in people’s minds” that Samuel Adams long ago noted could prevail. Call us the Ten Percent. Over the last four years we’ve educated our friends and family, and you’re hearing from us, and from them, in each of the Republican primary elections. We are the Ten Percent that does understand what’s happened to our country. Our efforts to educate will not end until all the people understand what you’ve done, and how you’ve done it. Ten percent has become twenty, and will continue to grow relentlessly, until our country belongs to the people, and not the special interests, once again.

We understand how your global machinations, sold to the Ninety-Nine Percent as “Free Trade,” have destroyed jobs here at home, shifting the wealth of the country from the pockets of the middle class to your own.

We understand how you’ve destroyed the middle class through your currency manipulation, with the “Federal Reserve System,” which is not “Federal,” but owned by private banks, which has no “Reserves,” but prints money to debase that already in existence on demand, and which is, quite simply, a “System” designed to serve the One Percent at the expense of the Ninety-Nine.

We understand that a world-wide empire is not intended to keep us safe, but rather to constantly stir up resentment of our activities in foreign lands, manufacturing threats that we then must spend trillions of dollars to defend ourselves against. Trillions that, not surprisingly, end up in the pockets of the One Percent.

We understand that the War on Drugs is actually a War on Minorities, as the incarceration rate of minorities soars relative to those who use of a long list of substances “banned for our own good.” We recognize it as yet another way to funnel our hard-earned dollars to the private prisons and weapon manufacturers of the One Percent, and to empower your agents of force.

We understand where the trillions of dollars spent to engage these wars end up; the crony corporations whose pockets it lines, the votes it buys, the fear it engenders in the Ninety-Nine Percent that keeps them crying for protection from the very people who enslave them. We understand that your promises of protection and entitlements are instruments to keep the Ninety-Nine Percent reliant on you for our future security.

As our forefathers did long before, we have sworn “our lives, our fortunes, our sacred honor” to returning this country to the ideals of liberty and justice they fought and died for. In this information age, the battle will be won, not with guns and bullets, but with the truth, and as we have been told, “Truth will Win.”

To the Ninety-Nine Percent: Join us. Learn what we have learned. Embrace what we embrace. Together, we are all-powerful. Divided, we are rival gangs for the One Percent to set against each other, battling for their amusement; reality-tv gladiators they can mock at their next cocktail party. Look for leaders who unite us in a quest for liberty, not gangsters who divide us in a quest for spoils.

To the One Percent: Your game is up. We will not choose between the Blue One Percent Candidate and the Red One Percent Candidate. We will choose a candidate that stands for the Ninety-Nine Percent. If you refuse us such a choice, we will desert your One Percent Parties and support others, exposing your crimes to the world for all to see. We will seek, through free associations with others who understand, protections for our future that do not rely on your largess.

“An idea whose time has come cannot be stopped by any army or any government.” – Ron Paul

Sincerely,
The Ten Percent (and growing)

Follow this Tireless Agorist as we explore the history and philosophy that led to the creation of this letter. If it resonates, share it with others who care.