A Look at Epilepsy

During some seizures, a person may stop what they're doing and stare off into space for a few seconds without being aware of it. 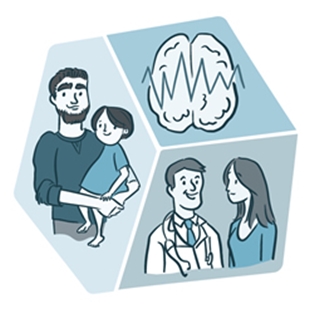 When you hear the word epilepsy, you might think of intense seizures with muscle spasms and loss of consciousness. But most epilepsy seizures are surprisingly subtle and may be hard to recognize. These little spells can be an early warning sign of epilepsy, a brain disorder that strikes an estimated 1 in 26 Americans at some point in their lives. The sooner epilepsy is recognized, the sooner it can be treated and seizures prevented.

Most people know surprisingly little about epilepsy, even though it’s the nation’s 4th most common neurological disorder, after migraine, stroke, and Alzheimer’s disease. Epilepsy is marked by repeated, unpredictable seizures that may last for seconds or minutes. Seizures arise from abnormal bursts of electrical activity in the brain that trigger jerky movements, strange emotions or sensations, falls, or passing out.

“Epilepsy can strike people of all ages, from the moment of birth—even in the delivery room—up to older ages,” says Dr. Jeffrey Noebels, an epilepsy expert at Baylor College of Medicine. The condition is most likely to first arise in children and in adults over age 60. “Most types of epilepsy last a lifetime, but some are self-limited, meaning they can go away on their own,” Noebels adds.

The causes of epilepsy are varied. “Defects in genes are probably responsible for the largest fraction of epilepsy cases,” Noebels says. Scientists so far have linked more than 150 genes to epilepsy. “Other types of epilepsy can be acquired through trauma (such as head injury or stroke), infections, brain tumors, or other factors.”

Anything that disrupts the normal pattern of brain activity—from illness to brain damage to faulty brain development—can lead to seizures. But for up to half of people with epilepsy, the underlying cause is simply not known.

Types of seizures can also vary widely, which is why epilepsy is sometimes called a “spectrum disorder.” In some people, seizures may appear only occasionally. At the other end of the spectrum, a person may have hundreds of seizures a day. The seizures can be severe, with convulsions, loss of consciousness, or even sudden death in rare cases. Or seizures may be barely noticeable.

Such subtle seizures—sometimes called partial or focal seizures—can cause feelings of déjà vu (feeling that something has happened before); hallucinations (seeing, smelling, or hearing things that aren’t there); or other seemingly mild symptoms. During some seizures, a person may stop what they’re doing and stare off into space for a few seconds without being aware of it.

“These little spells or seizures can sometimes occur for years before they’re recognized as a problem and diagnosed as epilepsy,” says Dr. Jacqueline French, who specializes in epilepsy treatment at the New York University Langone Medical Center. “They can be little spells of confusion, little spells of panic, or feeling like the world doesn’t look real to you.”

The symptoms of these small seizures generally depend on which brain regions are affected. Over time, these types of seizures can give rise to more severe seizures that affect the whole brain. That’s why it’s important to get diagnosed and begin epilepsy treatment as soon as possible. “If you notice a repeating pattern of unusual behaviors or strange sensations that last anywhere from a few seconds to a few minutes, be sure to mention it to your doctor or pediatrician,” French says.

Over the past few decades, NIH-funded scientists have been working to develop better approaches for diagnosing, treating, and understanding epilepsy. The condition can now be diagnosed through imaging tools like MRI or CT scans, by testing blood for defective genes, or by measuring the brain’s electrical activity. Seizures can often be controlled with medications, special diets, surgery, or implanted devices. But there’s still a need for improved care.

“Traditional medications for treating epilepsy are effective but problematic,” says Dr. Ivan Soltesz, who studies epilepsy at Stanford University. “About 1 in 3 patients has drug-resistant epilepsy, meaning that available drugs can’t control the seizures. In these cases, surgical removal of brain tissue may be the best option.” When the drugs do work, he explains, they can also cause numerous side effects, including fatigue, abnormal liver function, and thinking problems.

One issue with today’s medicines is they aren’t targeted to the malfunctioning brain cells. Rather, they tend to affect the whole brain. “The drugs are also not specific in terms of the timing of treatment,” Soltesz says. “The medications are always in the body, even when the seizures are not occurring.”

He and other researchers are working to create highly targeted epilepsy therapies that are delivered only to malfunctioning brain regions and only when needed to block a seizure. So far, they’ve developed an experimental approach that can stop epilepsy-like seizures as they begin to occur in a mouse. The scientists hope to eventually translate those findings for use in people who have epilepsy.

In another line of NIH-funded research, a team of scientists is studying a deadly and poorly understood condition called SUDEP (for sudden unexpected death in epilepsy). “Most people with epilepsy live long and happy lives. But SUDEP is the most common cause of the shorter lifespan that can occur with epilepsy,” says Noebels. “It’s been a real mystery. We haven’t known who’s at greatest risk for this premature death. It can happen to different people who have epilepsy, from all walks of life.”

Noebels and his colleagues have identified several mouse genes that seem related to both sudden-death seizures and heart rhythm problems. The researchers are now searching for similar human genes that may help predict who’s most at risk for SUDEP. “We believe that SUDEP doesn’t have to happen—that we can learn about it, predict it, and eventually find better ways to prevent it in every patient,” Noebels says.

You can take steps to reduce some risk factors for epilepsy. Prevent head injuries by wearing seatbelts and bicycle helmets, and make sure kids are properly secured in car seats. Get proper treatment for disorders that can affect the brain as you age, such as cardiovascular disease or high blood pressure. And during pregnancy, good prenatal care can help prevent brain problems in the developing fetus that could lead to epilepsy and other problems later in life.

“We’ve made exciting advances to date in our understanding of epilepsy, its prevention, and treatment,” says French. “But there’s still much we have to learn, and much we’re actively working to improve.”