A Love Worth Pirating For

Education, In the News, Service Clubs 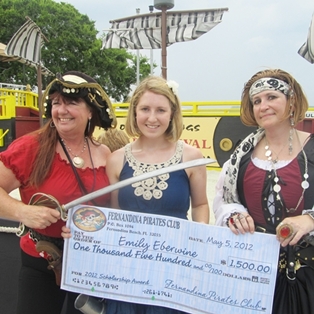 The Fernandina Pirates Club, Inc. offers a scholarship to a graduating Nassau County high school senior and the 2012 winning essay was A Love Worth Pirating For, by Emily Eberwine. Nine entries were received competing for the $1,500.00 scholarship for a college bound senior. No entries were received for the $500.00 prize the club offers to a military bound senior each year.

The club only requires the essay be written about pirates, past, present or future. The scholarship was awarded during the Isle of Eight Flags Shrimp Festival.

Here is the winning entry:

It was a balmy summer day in Boston, Massachusetts. Cattle laid to rest in the fields, and dragonflies hovered above the ground as if held there by invisible strings. Men of importance with places to go and people to see trudged across town to their destinations. All seemed to move at a languid pace like molasses through a straw. Settled at the edge of the dock were two lovers, confiding solely in the other the secrets of their innermost being. For he must set sail come daybreak, and she whole-heartedly desired to make the voyage as well.

The year was 1775, and ideas of revolution began to circulate throughout the American colonies. Britain had been imposing new taxes on the colonies for years, in order to gain back the money they had lost in paying for the Seven Years War. The colonists found themselves paying preposterously high taxes on goods such as paper, sugar, glass, and legal documents – items that had previously been easily attainable. The Boston Tea Party had just occurred, rebelling against the absurdly risen taxes on tea, which sparked a widespread interest in adventure and acts of valor. As the colonial Continental Navy became increasingly active in fending off the British merchant ships, the need arose for backup forces. Privateers, or warships that seized enemy commercial ships, were instrumental to this effort by disrupting enemy trade. Throughout the course of the war, over 800 vessels were commissioned as privateers, gaining nearly 18 million dollars through plundering, to put towards the growing American nation.

As the two dipped their toes into the murky water, William verbally illustrated his eventful and exciting experiences of life at sea for Fanny, his loving companion. She was greatly intrigued by his tales of adventure and exploration in foreign lands, and fervently wished she could join him on an ocean voyage some day. Fanny Campbell was unlike most girls at the time. Rather than sewing and mending while being cooped up inside, she was captivated with nature and the outdoors. To her, a day was wasted if not spent while riding horses, sailing, or hunting panthers in the woods. But despite Fanny’s seemingly masculine interests, William loved her nonetheless.

By 1777, William had been away at sea for two years. But while he was gone, another suitor came calling on Fanny, Captain Robert Burnet of the British Navy. Though she could have said yes at any time to the Captain and lived a very comfortable and plush lifestyle, Fanny loyally continued to wait for William’s return. And William, far at sea, had determined he would marry Fanny upon his return home. On a particularly stifling day out at sea, William leaned on the railing of the ship and dreamed about his detached love. As he strained his eyes for distant shores, what had first appeared as a mere sailboat on the horizon grew into an immense, formidable pirate ship, complete with a snow-white skull and crossbones insignia emblazoned on a death-black background. As the vessel came nearer, the once hardly audible sound of firing cannons grew to a deafening height. William’s ship fought back valiantly, but the crew’s attempts were all for naught, as the sea ruffians continued to sail up alongside the ship. Within moments, the American sailors were overpowered by the sunburned, bearded, motley crew of pirates. Both crews engaged in a rowdy skirmish, in which the captains of both ships perished. William, however, survived the takeover, and was forced onto the pirate vessel where he assumed a position of leadership among the crew.

One night while on the graveyard watch, William and two friends, Jack and Henry, decided to make a run for it. They quickly and silently lowered a smaller boat into the water, and rowed desperately until they were out of reach of the pirates. The dirty, exhausted men finally reached Havana, Cuba – only to be captured by Cuban officials and thrown into jail on suspicion of being pirates (since they had no proof of being forced aboard the pirate ship). Week after agonizing week passed for both William, and Fanny- who had received no word from William in quite some time. Weeks turned into months, and two more years later, William’s friend Jack was able to escape from the prison, and make his way back to Boston.

Woken by a hard, deliberate knock at the door, Fanny rushed to open it and reveal her visitor. Jack was standing on the doorstep, and handed Fanny a crumpled, dirty letter addressed to her from William. Its contents described the unfortunate events of his voyage. Her eyes hungrily ate up every single word on the page as she half believed what the letter was telling her to be true. Following a minute of silent thought, Fanny asked Jack to be ready at a moment’s notice for a daring adventure. Though he was confused by her secretive manner, he agreed. One week later, Jack found himself being led to a large vessel anchored in Boston Harbor that was to sail to England by way of Cuba. Fanny’s question to him grew increasingly illuminated by the evidence of the scene. Fanny Campbell had devised a plan to disguise herself as the male captain of an American merchant ship, and sail to Cuba to bravely rescue her separated love.

Under the black cover of darkness, Fanny’s ship sailed into the bay at Havana. She selected eight of her most loyal crew members, including Jack, and stealthily led them to the cell in which William was held captive for so long. The keys were obtained from a guard that they silently put to death, the enclosed men were released, and the entire party escaped the settlement as rapidly as the wind. Once all were safely aboard the ship, Fanny revealed her identity to William (as she was still disguised as the male captain). As the ship was sailed towards home, word was gathered that the Revolutionary war had begun in the American colonies. Because Fanny did not wish for their crew to be perceived as pirates, she encouraged the men to turn from their pirating ways and become privateers. Following that day, Fanny Campbell’s ship worked for the American Government- capturing enemy ships and turning the plundered booty over to the Continental Congress.

Upon returning to Boston, Fanny Campbell and William Lovell finally married. William began his career as a privateer throughout the remainder of the war, but Fanny never again went to sea. She had had the taste of adventure she always yearned for. During the Revolutionary War period, it was unheard of for a woman to sail; much less, become a pirate. Fanny Campbell risked reputational ruin for her noble deed. But because she did, she was reunited with her long lost love. She is especially admirable to me, as I can only hope I would someday encounter the love she had found. Who today, even among the most daring of people, would willingly face uncharted and dangerous waters, and unruly and dastardly pirates simply to follow the one they love? This unique brand of devotion would certainly qualify an individual to go down in history. And Fanny Campbell certainly has- as the woman who turned pirate to rescue her loved one.