A Message from Popovka, Crimean Peninsula

Lost in rhetoric, many news media, make mention of new Cold War, exposing their ignorance of what really is at stake in the Crimea. 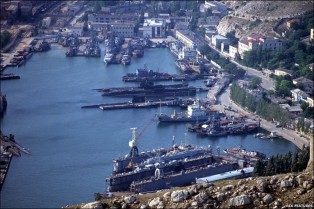 “Don’t trust the scary news you may see on TV. We in the Crimea are leading a normal life and what I can see from my window does NOT look like an invasion at all.”- email from Antony.

As Russia, or at least Putin, longs to re-establish the historic Russian powers of times long gone -even before communism, and Obama is finally being confronted with the inevitable signs of reaching the economic abyss of decades of spending more than 5% of annual GDP on the military, it should be clear by now that if we don’t stop politicians everywhere from their exploratory forays into war, we will soon find ourselves in a situation as portrayed by NBC’s TV series ‘Revolution’.

Oh I know I’m dreaming, and right now sweet Doris Day sings ‘que sera sera, whatever will be, will be‘ in my tortured brain, as ‘the future is no longer ours to see’, as we are being herded into the corral, yet still in denial.

“Oh I’m sorry. Did I upset you? Can’t say that I didn’t mean to. Yes I’m pissed, but in a nod to my wife’s concern, no I’m not stressed, just a tad sad to see how complacent the media have made us.

You see last week I wrote a blog story about a quaint little town named Popovka in the Crimean Peninsula which hosts an annual House Music Festival that attracts a hundred thousand young adults from across the globe to peacefully party and vacation for two weeks in August on the beaches of the Black Sea. Yesterday morning I woke up and read that Putin had put the war gloves on and his troops have reportedly occupied this peaceful piece of paradise in a move to protect Russia’s Black Sea fleet. Frankly, considering the vast amount of historic tribal disputes and skirmishes in this part of the world, I don’t see how Putin could not put his foot down at some point, but that remark of course will upset a lot of readers, who went, as I did quite actively, through the Cold War Years. Mind you I’m not saying Putin is right. Clearly not. What I say is that anyone with feet on the ground up-to-date info, could have seen this coming from a thousand miles away, yet everyone just cozied up in Sochi, right next door to the Crimea, just a couple of weeks ago to watch Winter Olympics.

It’s a strange world we’re living in and media don’t make it any easier to try and understand the stakes.

The Crimea is a peninsula off Ukraine located on the northern coast of the Black Sea. The Autonomous Republic of Crimea occupies most of the peninsula, but not all. In a similar manner as the US operates a US Military base in Cuba called Guantanamo, Moscow operates its Black Sea fleet out of the city of Sevastopol (roughly 400,000 population).

Here on Amelia Island we may ‘proudly’ emphasize that we were occupied by 8 different flags in our known history, but get this: The Crimea over the course of its history saw The Cimmerians, Bulgars, Greeks, Scythians, Goths, Huns, Khazars, the state of Kievan Rus’, Byzantine Greeks, Kipchaks, Ottoman Turks, Golden Horde Tatars and the Mongols take control over its land in its earlier history alone. Also in the 13th century, it was partly controlled by the Venetians and by the Genoese; they were followed by the Crimean Khanate and the Ottoman Empire in the 15th to 18th centuries, the Russian Empire in the 18th to 20th centuries, Germany during World War II and the Russian Soviet Federative Socialist Republic and later the Ukrainian Soviet Socialist Republic, within the Soviet Union during the rest of the 20th century. Today, Crimea is supposedly an autonomous parliamentary republic within Ukraine and is governed by the Constitution of Crimea in accordance with the laws of Ukraine.

Here is what my friend Antony emailed me last week about daily life in his part of the world: “The tourist season lasts only 2-3 months in the Crimea but it is even shorter for Popovka, due to its godforsaken location in the middle of nowhere. Popovka is a small, sleepy village of only 5 streets on the beach. It blows up for the 2 weeks of the Kazantip Festival and then it falls into a coma for the other 50 weeks when nothing happens there. Nothing at all!

When I asked him this morning about the ‘invasion’ he emailed back: “Don’t trust the scary news you may see on TV. We in the Crimea are leading a normal life and what I can see from my window does NOT look like an invasion at all.” People in the Crimea know that they live on a very desirable piece of real estate and take envy in stride whenever yet another politician seems to got hot around the collar dreaming about owning it.

So what locals consider another political absurdity, our media interprets as: Closest to War since Cold War ended.

But the Crimean Conflict has absolutely no reference to the Cold War!
Let me explain.
As Ukrainian updates inundate the newsrooms around the world in search of 24 hour a day news distribution, the threat of war increases according to political grandstanders and media pundits. For reasons of historic reference, the relationship between the US and Russia, Cold War references have made the rounds and are starting to dominate public perception of the Crimean conflict. Absolutely and categorically wrong.

The Crimean conflict has nothing to do with opposing ideologies but rather is about military strategy and economic influence. Beyond that – the emergence of another Cold War is nearly impossible in todays globalized world.

The conflict is about power. (Ironically most conflicts are). Putin’s most important military bases is located on the Crimean peninsula and the new Ukrainian government in Kiev has insinuated that it would like to annul the existing agreement allowing Russia to base part of its Fleet there. Moscow does not have a real alternative for relocating its Black Sea Fleet and consequently decided to rattle the sabers a little. That they do this by announcing to the world that they fear for the lives of its ethnic brothers and sisters in the Ukraine, is a trick Hitler master in Poland in 1939.

Yet realistically, I think neither Russia, the US nor the EU are capable or interested in initiating a new Cold War. Despite their rivalries in power and influence, most are aware that cooperation is mandatory to address some of the most pressing global problems, and beyond that, there are some mighty powerful new players on the field since the Cold War ended. China for example has a major interest in Ukrainian agricultural output and would frown upon a military conflict there, undoubtedly resulting in sanctions. I could be wrong but globally I don’t think that the US and Russia have remained powerful enough in the past 25 years, to jam world politics and to force other nations to play by its rules as they did during the cold war.