John Wilkes of Red Jump Suit Apparatus will be taking on DeeJay Capone, at Sheffield's at the Palace in Fernandina Beach. 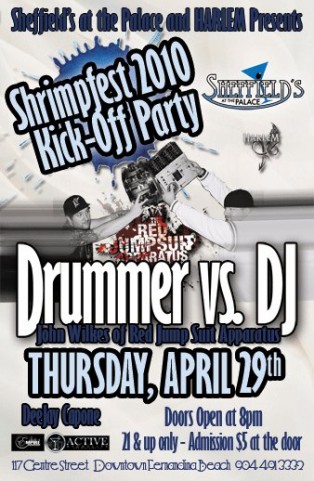 John Wilkes of Red Jump Suit Apparatus will be taking on the DJ, DeeJay Capone, on the stage at Sheffield’s at the Palace in historic Fernandina Beach. Are you looking for something to do after the Shrimp Festival Parade? Then make plans now to attend this fun event with your friends; the doors open at 8:00 PM.

Tickets are only $5.00 to this Shrimp Fest Eve Jam! Kick off Shrimp Fest 2010 at Sheffield’s at the Palace.