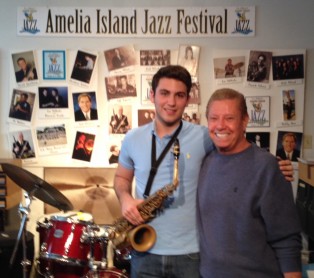 18 year old Ryan Duncan, a gifted saxophonist from Jacksonville, will be honored with a college scholarship from the Amelia Island Jazz Festival, it was announced today by AIJF Artistic Director Les DeMerle. A four year member of the Florida All State Band while attending Douglas Anderson School Of The Arts, Duncan will accept the festival’s annual award during a special “All That Jazz” concert/show on September 20, 7:00 – 10:00 PM, at the Amelia Community Theatre at which he will also perform with the Dynamic Les DeMerle Band featuring vocalist Bonnie Eisele. For his university training, Duncan plans on joining the highly regarded music program at the University of North Texas.

“We could not be happier with this choice,” said DeMerle, “and we have no doubt that Ryan will make a strong name for himself in the jazz world ahead.” Although primarily an alto saxophonist, Duncan has proven to be equally proficient at tenor and baritone sax as well. He first began to play alto while at Fishweir Elementary School in Jacksonville and continued through Lavilla Middle School prior to entering Douglas Anderson. Given guidance from his older brother Howard, Duncan has been greatly influenced by such alto sax icons as Charlie Parker, Phil Woods, Sonny Stitt, and Cannonball Adderley. Notable trumpeters have also made their mark. “I’ve listened to and learned a lot from Clifford Brown and Nat Adderley records too,” he said. After undergraduate work at UNT, where he hopes to add Composition to his skills, Duncan plans to attend graduate school. “Currently, I am interested in playing professionally in a military band or teaching saxophone at the university level,” he added.

“All That Jazz” in September will offer a unique concert for area jazz enthusiasts. “For the first time, Bonnie and I will be presenting a show that is primarily derived from our cruise ship performances,” said DeMerle. Having recently returned home from several months of cruise contracts, most recently on the Oceana Riviera, where they visited European ports such as Monte Carlo and Portofino, DeMerle said that the band is in top shape musically and they look forward to a night of well-paced music, comedy, and ultimately lots of fun. “The ACT is a terrific facility and it will give us the opportunity to create a dazzling program similar to what you might see on Broadway or in Las Vegas,” he said. Along with Eisele the show will feature DeMerle on drums, Steve Strawley-trumpet, Don Zentz-sax and flute, Clarence Hines-trombone, Doug Matthews-piano, Ernie Ealum-bass, and Sammy Rodriguez-percussion.

Now in its 12th year, the AIJF will take place at various locations in Fernandina Beach, FL from October 4-11, and will kick off with its annual free concert in Amelia Park on Sunday, October 4, with U.S. Navy Band Southeast TGIF. It will continue October 7 with Jump Jive & Wail, a tribute to classic dance oriented swing music featuring the Dynamic Les DeMerle Little Big Band and spirited vocalist Eisele, a Latin Jazz Night October 8 that will showcase the sizzling hot, award winning, and internationally famous Trio Caliente, both at Sandy Bottoms. 2015 headliners will be guitar legend Larry Coryell, October 9 and jazz vocalist extraordinaire Kevin Mahogany, October 10 at the Omni Resorts Amelia Island Plantation. Additionally, the always popular late night jazz jams with AIJF’s 2015 musicians will follow the headliner sets on October 9 and 10 in the Omni’s Verandah Restaurant at Racquet Park. The festival will end on a swinging note Sunday, October 11, with a Dixie to Swing Jazz Brunch, featuring former Ray Charles saxophonist, Al Waters with DeMerle’s Jazztet at David’s Restaurant.

In addition to online, tickets may be purchased at the UPS Store, 1417 Sadler Road, in the Island Shopping Center, or at the AIFBY Chamber Of Commerce, Gateway to Amelia, A1A and Amelia Parkway. A not for profit 501(c)(3) corporation, the Les DeMerle Amelia Island Jazz Festival distributes proceeds toward its scholarship program to fund college educations for aspiring jazz musicians. For more information, schedules, and tickets, please visit the website: www.ameliaislandjazzfestival.com or contact the Festival Hotline at (904) 504-4772. Email address: info@ameliaislandjazzfestival.com