Always Get It in Writing

A written contract is there to protect you and the other party. More often than not issues will pop up, but if the issue is covered in the contract then there really is no issue. The problem is when an issue pops up and it is not covered, then it becomes a problem. Always, put it in writing and avoid problems in the future. 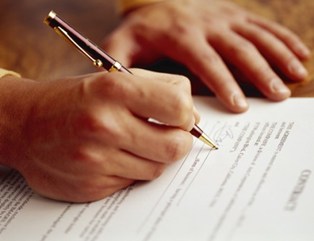 Verbal is a dangerous proposal in real estate

I had a conversation yesterday with a couple who “thought” they were buying a home in a small community just south of Orlando, Florida. It is always wise to get everything in writing. They rented a house in a quiet neighborhood and liked it. After several months they were talking to the owner and expressed a desire to own the home, only problem was their credit was not the greatest due to factors related to the current recession/depression. The owner assured them he would work with them and “hold paper” so they could own the home.

The seller told them that instead of going through a title company or attorney, he could handle the necessary paper work and thus save them a lot of money. The buyers agreed and all seemed well. I didn’t get all the details, but the end product was there was no contract from the beginning, they didn’t own nor were they leasing the home. I couldn’t help but feel sorry for these good people who “thought” things were going their way for once, just to find out the opposite. I thought this would be a great time to talk about why having a contract is so very important, especially today.

Always remember the golden rule of any contract or agreement, “Get it in writing” from the very beginning, everything. Regardless of how well you know the other party, get it in writing. A well written contract is there to protect all parties and avoids future problems that may arise. I can’t tell you how many times I’ve heard both buyers and sellers say, “Oh, this or that will never happen”, folks believe me things happen and usually it is the very things you think will never pop up that do.

Other then all the basic information such as, the date, parties involved and their information, signatures of all parties and what is being conveyed or agreed upon it also spells out the terms of the transaction. Who will do what, for how much and when. Usually an offer is made and an acceptance is given, this is called mutual assent. In most cases, though the initial offer may be rejected or a counter offer is made, this could go on for two or three times, it begins to get confusing. This is the very reason every detail must be in writing, all parties have a clear understanding of what is expected of them and how much it will cost them. The mutual assent or total understanding is not lost in the shuffle.

I’ve heard people complain about how long a contract to purchase real estate is, they say it’s just too much information and is unnecessary. When it comes to conveying real estate, these forms have been tested by time and if anything there is not enough information in them. Many times we find ourselves writing in additional terms and agreements to protect all parties. Many contracts must be in writing in order to follow the letter of the law, the sale of real estate or those agreements that take longer then one year must be in writing to satisfy what is termed the statute of frauds. In a nutshell, put all contracts in writing and avoid any possible confusion down the road.

Avoid trying to write “legalese”, I always tell my agents to use plain ole behind the barn English. I don’t know what it is but most people think they must use terms they hear on legal TV shows when writing a contract, not so. Simply write it down as you would speak it, solid and to the point. Should there be questions in the future about a certain element of the contract, anyone reading it should be able to go back and read and completely understand want the initial intent of the agreement was.

Should you have the contract reviewed by an attorney? I always tell my sellers and buyers the answer to that question is simply, yes. In my opinion I think it is always best to have that legal eye looking things over. In a down economy like we are experiencing though, everyone wants to try and save every dollar they can and in doing so they may be cutting the very ingredients out that may be what will save them in the future. The couple who thought they were buying a home just to find out many months later legally they weren’t. Take care of the little details now and the little details will not sink you in the future.

A written contract is there to protect you and the other party. More often than not issues will pop up, but if the issue is covered in the contract then there really is no issue. The problem is when an issue pops up and it is not covered, then it becomes a problem. Always, put it in writing and avoid problems in the future.