Created for a series of Sports Car Illustrated humor pieces in 1958 the fictional Pignatelli marque was realized by Illustrator Stan Mott. 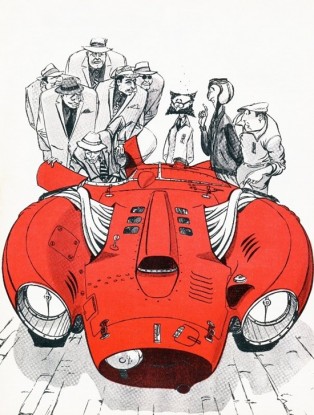 The Amelia Island Concours d’Elegance Celebrates the Genius of Stan Mott and the 100th Anniversary of Italy’s Pignatelli, more or less.

Created for a series of Sports Car Illustrated humor pieces in 1958 the fictional Pignatelli marque was realized by Illustrator Stan Mott. His fearsome Pignatelli symbolized the spirit of the no-limits mid-Fifties sports car racing cars.

“I drew the car I wanted to drive,” said Mott. The Pignatelli was born.

“Pignatelli’s 100th anniversary at Amelia will honor the brilliance of Stan Mott.” said Warner. Many pieces of Mott’s original artwork, featuring Pignatelli, will be made available to the public for the first time at the 17th Amelia Island Concours d’Elegance.

“Sadly you can’t own or drive a Pignatelli,” said Warner, “But you can own a piece of Pignatelli’s extraordinary history at Amelia next March.” 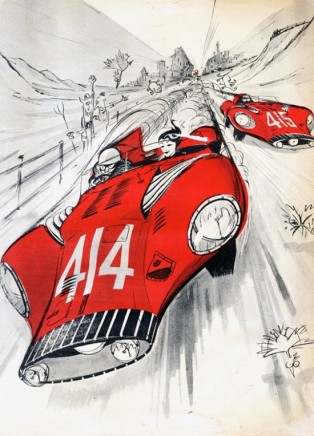 Pignatelli enthusiasts can indulge their automotive fantasies from March 9th through 11th at the Ritz-Carlton Amelia Island when the new Pignatelli SLM (Stealth LeMans, or, in Itialian Segretezza LeMans) prototype will be unveiled in a world premier, Saturday, on the concours field.

“From the beginning ‘The Amelia’ has been known as the racers concours and the fun concours,” said Warner. “Honoring Stan Mott and his Pignatelli reinforces those traditions.”

“Forty-six years early,” said Amelia Chairman and Founder Bill Warner. “Because all but two people involved with the Amelia Island Concours will be dead by 2058: we don’t want to wait.”