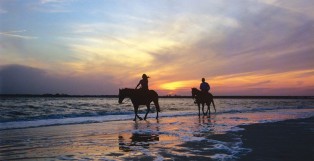 “We work diligently to maintain an effective, top-notch marketing strategy and it is gratifying to have our hard work recognized among our industry peers and partners,” said Gil Langley, president and CEO of the Amelia Island CVB. “Our entire marketing team is proud to have such a great showing at the Flagler Awards this year.”

The Amelia Island CVB won Henry Awards in the Direct Marketing, Print Advertising and Mixed Media Campaign categories, and took home a Silver Award for Mobile Marketing and Bronze Award for Tourism Advocacy. The CVB’s Mixed Media Campaign entry was also honored with a Best of Show Award.
This is the CVB’s second Best of Show Award in the past three years. Additional, Flagler Awards include a Henry Award in Rural County Marketing (2013), Best of Show for the Amelia Island Visitor’s Guide (2012), and Silver Award for Special Events (2011).

As the state’s annual tourism marketing competition, the Flagler Awards recognize Florida’s travel businesses and organizations who demonstrate outstanding tourism marketing efforts. Each year, the Flagler Awards honor many of the countless individuals and organizations that help position Florida as a premier travel destination and pay tribute to the determined efforts of those who help ensure the continued success of the state’s most important industry.

In an addendum to above press release Mr. Langley noted correctly that “awards mean nothing without measurable performance“, pointing out this has been a record year for Amelia Island tourism. For the 12 month period ending July, 2014 overnight visitors were up 12.8% over the same period last year, culminating in 550,000 overnight guests.
Mr. Langley also pointed out that according to Florida TaxWatch, 88 new visitors create on average one new job. For Nassau County, this means over 200 new jobs, with one in every four private sector employees in the county working in the hospitality business now.

Overnight tourism for the mentioned period produced an economic impact of $485.3 million, while during the May-July time period, over 42% of local sales taxes were collected by tourism related businesses. This year, for the first time, over $100 million will be spent by guests on lodging alone.

Numbers that clearly justify Amelia Island’s Tourism Promotion budget moving into the ‘big spender league’ this year. “We are now part of he ‘Big Boys Club’ of destinations spending more than $1 million in advertising per year”, says Gil Langley.