Amelia Island Featured in Where to Retire Magazine

In the News, Lifestyle

Where to Retire magazine was launched in 1992 with the goal of helping its readers find the ideal place to retire. 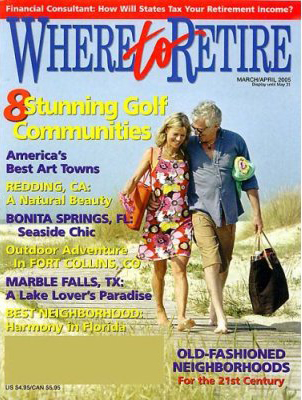 Houston, TX – Amelia Island, FL, has been selected by Where to Retire, the only magazine in America geared toward helping people with retirement relocation decisions. As a top retirement destination, Amelia Island will be profiled in the feature story 8 Treasured Islands for Serene Living. in their November/December issue, available nationwide on October 18, 2011.

Where to Retire editor Mary Lu Abbott said many retirees dream of relocating to an island. “Some of the most beautiful and diverse islands are right here in the United States. They provide a tranquil setting away from the big city, and retirees can still choose their preferred climate, from sunny Florida up to snowy Maine,” Abbott said.

Each year, 700,000 Americans relocate to new towns to retire. Generally, relocating retirees are healthier, better educated and more affluent than those who choose to not relocate. They bring significant economic benefits to their new states and hometowns. Nationally, two dozen states and hundreds of towns seek to attract retirees as a source of economic development.

Where to Retire magazine was launched in 1992 with the goal of helping its readers find the ideal place to retire. Published six times a year, the magazine covers the best retirement regions, towns and master-planned communities, and has a national circulation of 200,000. The magazine is also sold on various newsstands and at Barnes & Noble bookstores. For a magazine subscription, please visit www.wheretoretire.com.