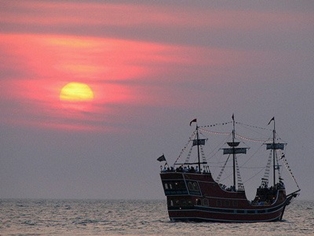 With the opening of the 4th installment in the Pirates of the Caribbean movie franchise, there have been many articles and information about the movies and renewed interest in pirates. I read one such article entitled, Pirates of the Caribbean: 5 Places to Vacation like Captain Jack Sparrow, and I was disappointed to note that Amelia Island, Florida was not mentioned. Fernandina is definitely a great vacation spot for pirates!

The places that are mentioned are Port Royal, Jamaica, Tortuga, Haiti, New Providence, Bahamas, Newport Rhode Island, and Bath Town, North Carolina. Bath Town is notable for Blackbeard’s murder and the ruins of his ship, the Queen Anne’s Revenge just off the coast. The pirates of Amelia Island may not have Queen Anne’s Revenge, but they do have their parade ship, Amelia’s Revenge.

Amelia Island history has unfolded under eight flags including the French, Spanish, English, the Patriot Flag of the Republic of Florida, the Green Cross of Florida, the Republic of Mexico, American, and the Confederate. In 1817, Sir Gregor MacGregor and his men captured the island from Spanish defenders. Slave trading and smuggling were thriving trades. After MacGregor left, Luis Aury brought his armada to the harbor. He declared himself the ruler of the island and turned Amelia Island into a pirate refuge. It was also a location for buried treasure. The United States Naval force eventually ran Aury out of Fernandina, but that doesn’t mean that the treasures have all been found!

Another reason that Jack Sparrow should vacation on Amelia Island is its close proximity to St. Augustine and the Fountain of Youth. In 1513, on Don Juan Ponce de Leon’s expedition to locate the island of Bimini, they sighted land near the present city of St. Augustine and named it La Florida. The famed Fountain of Youth, the “spring that restores the youth of anyone that drinks from its waters” is still there today.

St. Augustine is also home to the pirate ship, Black Raven which will be offering a Seafood Dinner Cruise each Wednesday all summer starting on June 15, 2011. This is the perfect adventure for a pirate!

Finally, a pirate could not find better vacation weather. With abundant sunshine and a beautiful ocean breeze, it is always a perfect time to visit here. With so much to offer, how could a pirate not want to vacation on Amelia Island?