Amelia Island Memories of the 1950s

I was talking with a friend a few months ago and found out there are Cushman clubs around the country that have annual meetings with many old scooters on display. 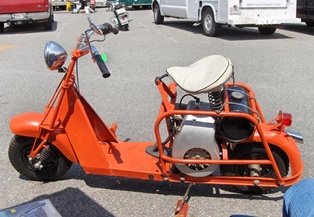 Growing up in the 50’s here on Amelia Island was indeed a treat. We didn’t realize it at the time but now that we are all older, we now know how very special it was for that privilege. The largest employers on the Island were of course the two paper mills, shrimping and boat building. Tourism had not really hit the scene as a major employer. Most of our tourist would be families coming from Georgia to the Island to spend a week or so at the beach. I remember the boys would look forward to all the pretty Georgia girls and of course the girls would look forward to all the handsome Georgia boys. After the summer vacations were over, things would return to normal.

I remember owning a 1946 Cushman Motor scooter. My neighbor Walter owned one also and together we would work on those old war horses and ride together. They were basic, simple machines that were bullet proof. No frills like head and brake lights or horns, just basic riding machines that would get you from point A to point B, most of the time. My scooter had a formula that you had to follow in order to crank it. First I had to spray a shot of starting fluid in the throat of the carburetor then kick it over and on or about the fifth try it would start. After the initial start up in the morning there were usually no more issues during the day. 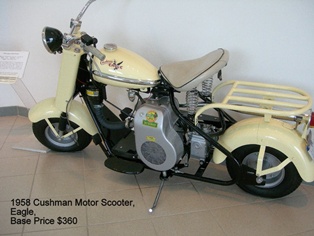 I did graduate to a more modern scooter in 1962. I bought a 1958 Cushman Eagle. It was orange and man was I sitting on top of the world. I now had things like a headlight, tail and brake lights, a tag light and yes, a horn. You could always tell a Cushman Eagle was coming down the road just by the sound of those great pipes, low and throaty sound. The Eagle also had a two speed transmission with the gear shift on the side of the gas tank with the clutch on the left side of the floor board that you depressed with your foot in order to change gears. I sold the Eagle to purchase a BSA 650, a real motorcycle. I kept this bike until April of 1964 when I left home for the US Army. I will always remember the Cushmans; those were some great riding days.

I was talking with a friend a few months ago and found out there are Cushman clubs around the country that have annual meetings with many old scooters on display. I plan on attending one of these meets. I catch myself looking at old pictures of Cushmans on line. It was companies such as Cushman who helped make up the fabric of American industry. This was rock solid equipment that would last forever. What’s happened to the industries we once enjoyed? Most are out of business are either foreign companies have replaced them.