Now is the time to book a summer fishing trip as the action is red hot near Amelia Island, Florida. 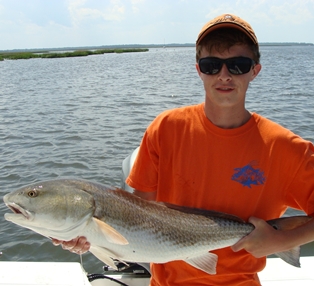 Our party of three anglers patiently waited for me to castnet a baitwell of live pogys which are schooling up in the backwater creeks; due to the lack of rain, I presume. One cast produced enough small pogys, just right for large seatrout, flounder, sharks and big reds.

We tried several usually productive spots with no luck. The tide was dead low and no tidal movement usually means slow fishing. Moving to another sandbar, an oyster bed area, the tide eased in bringing with it clear water. We could see bonnethead and sandsharks as they cruised over the sandy bottom. Live pogys were pitched to them and they obliged, providing some rod bending action on our 12 lb. spinning tackle. As the tide rose, I suggested another oyster strewn area with a deep drop off adjacent to it.

We drifted our live pogys along the oyster covered banks without success. Then just as we were ready to call it a day, Tyler, one of our shark catching experts aboard the CleanSweep boat had been soaking a bait on the bottom, in a little deeper water; he indicated that he was hooked up. Another Shark? Not this time! Although this fish produced some blazing runs, it surfaced in a shallow area and waved its large tail indicating that it was a sizeable redfish. Tyler deftly worked the red around sharp oysters which usually part light fishing line upon contact. Applying just the right amount of pressure and drag to wear the fish down, the big red surfaced boatside and I scooped it up in the landing net. It measured 36 inches, and was probably 15 to 18 pounds. This is a trophy catch on 12 lb. spinning tackle. We revived this beauty and she swam off to fight again another day.

Congrats to Tyler and crew for a memorable catch!

Now is the time to book a summer fishing trip as the action is red hot!