In a short couple of years, Pétanque (feet anchored) has become a household game on Amelia Island and Fernandina Beach. 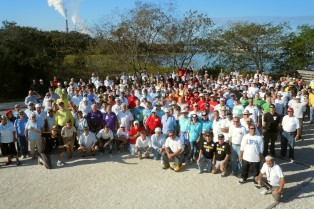 The Players at the 2011 Petanque America Tournament on Amelia Island

It was already the third edition of the Pétanque America Open Tournament last weekend on Fernandina Beach’s riverfront and once again the event was graced with glorious weather. And this year’s remarkably strong performance of 3 local teams made the tournament extra sweet. I would have to check back in the archives to find out if we had any local teams in the 2009 tournament, but if so, there could not have been many, since the game of Pétanque was entirely unknown in these regions, unless there was a French heritage involved. Well that has changed a lot in a little over 2 years and 3 tournaments.

Since 2009, the tournament has grown from 88 teams to 136 teams this year and the appetite for this magnificent game on our island has led to the formation of the Amelia Island Boules Club which sent no less than 14 teams to this year’s competition. Three of these teams made it into the prize money; a very pleasant surprise and measuring stick of the progress for the game here on island. All those Wednesday nights and Saturday Mornings practicing at the waterfront, on Café Karibo’s courts or behind the Rec Center in the heat of the summer, are paying off.

Locals Nicolas & Caroline Lacand, Bryan Mason & Jason Deringer and John & Colleen Hodge came out on top in the consolation rounds and if we’re talking 136 teams from all over the country and the globe, that is truly remarkable and promising for the future of the game of Pétanque here on Amelia Island.

On the professional level the tournament was pretty much a done deal for multiple French world champion Marco Foyot who had teamed up for the occasion with country man Bernard Martin who resides in Bradenton Florida. Foyot, who has been a force in the sport since the early 1980s already showed during his clinics prior to the tournament on Friday, that he would be the one to beat. In the end however he showed to be too strong for the rest of the field, even though 3rd time competitor Jean Pierre Subrenat and his young partner Damien Hureau managed to give the winners a serious run for their money in the finals, that pulled the game way past another gorgeous sunset to a finish in artificial light.

Foyot has made it a personal tradition before every final he competes in, to auction of his personal balls (boules) for one of his charities. He had a pretty good catch here on Amelia Island as his balls fetched $750 in the winning bid.

The final results for the concours were: 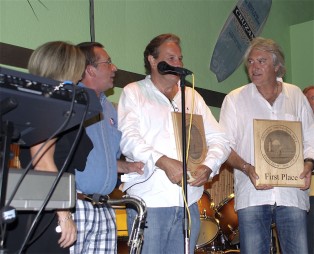 With the way the tournament here on Amelia Island is laid out, every team has a minimum of 7 games to play (5 on Saturday and 2 on Sunday morning) before semi finals and finals in winners and consolation groups take place on Sunday afternoon. This avoids eliminations in the first round, and the result is that everyone’s happy and stays in beautiful Fernandina Beach for the duration of the tournament and beyond. Hotels and Inns are booked, restaurants are full and shops are busy as the Historic District enjoys a Riviera style atmosphere. It does also require however the magical transformation of a normal boat trailer parking lot into no less than 68 competition courts in the days leading up to the tournament, which is done in a most superb public/private cooperation effort as the City’s Public Works Department and tournament volunteers get the special surfaces ready.

The Award Ceremony at Sandy Bottoms was packed until midnight on Sunday night and if Sandy Bottoms had opened its outside deck bar, the party would probably still be going on, because the weather was just magnificent.