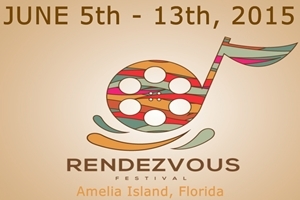 Rendezvous Festival and Eurochannel have entered a partnership initiating worldwide exposure to this nine-day movie, music, and gaming event being held all over Amelia Island in June 2015. Featuring movie screenings, talks, concerts, expositions, tributes and parties, the Rendezvous Festival is named after a music club on Amelia Island’s American Beach that once hosted famed musicians such as Louis Armstrong, James Brown, Billie Daniels, and Ray Charles in the 1930’s, 40’s, and 50’s. In 1964, the Rendezvous was hit hard by Hurricane Dora and everything was destroyed.

Eurochannel is dedicated to promoting European movies, documentaries, and music. Director of Programming and Acquisitions of Eurochannel Christian Poccard, has participated in the selection committees of Film Festivals such as Berlin and Rotterdam, as well as attending Film Festivals around the World like Cannes, Venice, Rome and others. Their branch into music permits viewers to find legends like U2 and Phil Collins performing alongside the hottest upcoming musical acts like Davie Guetta and Enrique Iglesias. Eurochannel brings viewers into the most important film festivals in Europe, and now Amelia Island, where the latest in independent films and music are being positioned to take the world by storm this June.

One highlight of the Rendezvous Festival takes place June 11th when Country Music Association recording artist the Shane Wooten Band takes the stage for a high energy, outdoor concert at Main Beach in Fernandina. Shane, from Ocala, Florida, is a CMA up and coming artist to watch in 2015. “Shane Wooten caught our attention with the numerous accomplishments he has gained so far in his career,” said Integrity Music Management President David Adkins.

The goal of the festival is to inspire the creativity and imagination of new and experienced filmmakers, gamers, and musicians by showcasing the talent of industry professionals.

The Rendezvous Festival takes place June 5th – 13th and is all about entertainment by bringing artists and the community together for an amazing event.