It seems that more Americans are traveling by train these days, according to Amtrak's passenger numbers 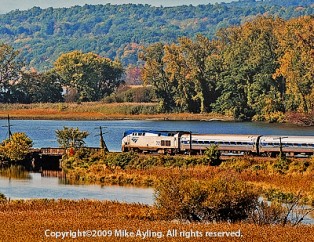 Amtrak on its way through the Hudson Valley

I pity anyone who thinks that Amtrak is a bad choice when traveling into New York City from Upstate New York. It’s a comfortable two and a half hours by train along the most beautiful part of the Hudson River Valley with the Catskill Mountains in the background. I think Americans have not given Amtrak a fair chance in the 40 years of the company’s existence. Their service was timely, affordable and comfortable, and in spite of the fact that we traveled in traffic hour (6pm), the train was empty. Put this service anywhere else in the world and you’ll have to fight for a seat. We traveled in style with a Happy Hour Cocktail while watching the scenery unfold outside the panorama windows.

Next time we’re planning a trip up to Canada, we may fly to New York and take Amtrak up through the Hudson Valley, the Adirondack Mountains, past Lake Champlain and into Montréal, one of the most exciting cities in North America.
I truly regret that Americans have lost a historic love story with traveling by train. Long before there were automobiles, the train took us east-west and north-south through this majestic country, reminding us how much courage and perseverance it took to settle America. Train travel had style, glamor and comfort, long before speed took relaxation out of traveling.  Of course this is only one of my petpeeves with American transportation, The other one being that everyone thinks they need to travel in their own vehicle because they need to take the major part of their household including kitchen sink with them on a trip.
Personally I live by my lifelong experience that “life’s adventures won’t begin until you step out of your comfort zone” and that’s how we travel; base outline preparation with enough space for flexible adjustments.
I grew up that way. My parents took 4 children and a nanny in a Volkswagen Beetle, including tent, air mattresses, camping equipment, cookers and canned food for a month long trip to Southern Italy in 1962. I cannot remember the undoubtedly cramped interior of that little car, but I can remember the fun, the games we played, the meals around the campfire, the history we visited and what we learned and appreciated about each other. In those days, Italy was almost impossible to get to by train from Holland. It is different today with several tunnels through the Swiss Alps or a straight shot to the French Riviéra and form there hugging the Mediterranean coastline down to Naples. The time to get there is about the same, the stuff you can take with you is actually a bit more than in that Beetle so long ago, the cost is very affordable, but most of all your vacation starts when you first sit down in your reclining lounge chair that is substantially bigger than a seat on an airplane.
I don’t know if Americans ever will get back to the comfort of traveling by train, but I for one am happy that Amtrak is celebrating its 40 years as America’s Railroad this year, reporting that an unprecedented surge in ridership to 28.7 million passengers in 2010, gives hope for a healthier future than was projected in recent decades.