An update on the Vandenberg

In an effort to relieve fishing and diving pressure on the natural reefs more and more mothballed and retired government ships are being transformed into instant artificial reefs. 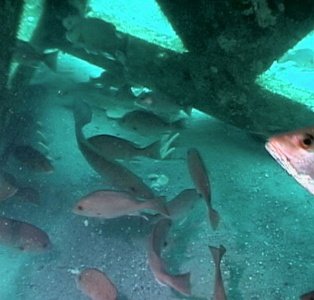 The 523‚Äô 17,120 ton General Hoyt S. Vandenberg was sunk off the coast of Key West on May 27, 2009 in 140‚Äô of water. In an effort to relieve fishing and diving pressure on the natural reefs more and more mothballed and retired government ships are being transformed into instant artificial reefs. The Vandenberg has proved to be just that. The ship has attracted many fish and sea life in its short period of time on the ocean floor and has become a Mecca for sport divers and spear fishermen alike. With all the good a structure such as the Vandenberg provides for marine life one would question why more of these decommissioned vessels aren‚Äôt used for this purpose, the facts below may answer that question.

The final numbers from concept to completion for the Vandenberg project have just been released. Total cost of the project $8.6 million; nearly 4 times greater than the original estimates in 2001. Over 80,000 man hours were spent on the cleanup required before her sinking removing 1 million gallons of oily water, 184 55-gallon drums of paint chips, 46 tons of debris, 180 cubic yards of marine growth, 100 gallons of hydrocarbons, 385,529 pounds of PCB‚Äôs, 81 cubic yards of asbestos, 300 pounds of mercury and over 800,000 feet of wiring. The sanitation alone took 85% of the total budget for the Vandenberg and was by far the most time consuming. In addition to the absorbent cost associated with the project, thousands of man hours and all the pollutants that had to be removed, 19 government agencies had to come together in perfect concert to police and permit before the ship could be sunk; a total of 8 years to see it through to completion.

I‚Äôm glad to see new life being given to a few of these mighty ships of the past, but like everything else I only wish it didn‚Äôt cost so much.