And The Turtles Are Baaack…….!

The first turtle nest of the season was spotted this morning in front of the Ritz Carlton Amelia Island. 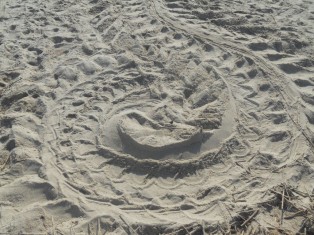 Not only did we get a visit of two French Navy schooners with some 50 plus crew this weekend, it seems that a 1,000lbs female Leatherback turtle must have followed them in their slipstreams.

Early Sunday morning a guest at the Ritz Carlton Amelia Island spotted the turtle making her way back to the ocean after a night of hard labor laying about 60 eggs, making this nest the earliest one on record on Amelia Island.

Earlier today I received this update from the resort’s Director of Public Relations, Joseph (Joe) Murphy:

As you know, it is our policy not to report on celebrities visiting the hotel but today we can share that a rare Leatherback turtle chose our property to nest. It’s the first nest of the season on Amelia Island and one week before the official season begins. It’s also the earliest date that a turtle nest has been recorded on Amelia Island. The turtle weighs an estimated 1000 lbs. and buried an estimated 60 eggs. It’s distinctive sand tracks are still in place. The Sea Turtle Watch organization has marked the nest near the resort’s Ocean Front Lawn.

So let this be a warning for all of us on the beach, it’s once again time to pay attention to the bright light issue along Fletcher Ave. homes, condos and resorts, to keep the turtles safely away from the road.

Also in town were the French Navy Schooners ‘Etoile” (Star) and “La Belle Poule” – the Pretty Hen is the literal translation, but what is really implied is a beautiful girl. Actually the legend is that the original 26 gun warship was named after one of Napolean’s sweethearts, he had nicknamed “La Belle Poule”.

We had the pleasure of having dinner with the entire crews on Friday Evening at the American Legion and on Saturday we went out to see the ships and had some champagne French style on the beach.

With the impromptu organization of a Pétanque Tournament on the Riverfront Sunday afternoon and some final toasts to a joyful visit and happy continuation of the Festivities, the two magnificent schooners left our Fernandina Beach docks around 10:30pm on their way to Jacksonville, Savannah, Annapolis, Philadelphia, New York and St.Pierre-Miquelon before heading back across the Atlantic ahead of the hurricane season.

Bon Voyage Nos Amis, you gave us a great practice run ahead of next week’s Shrimp Festival.