My bucket list expands with live performances of extreme accomplishment. Pink Floyd's The Wall set the bar in 1980 and Roger Waters 2010 version apparently took it a couple of notches up. 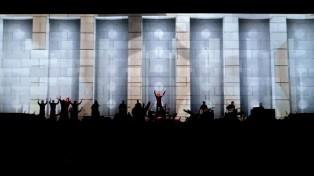 My friend Michael Shetzer has spent most of his adult life after 30 following a handful of superstar music performers on tour.

We first met in 1994 when he arranged front row tickets for the Rolling Stones’ Voodoo Lounge Tour in the then Downtown Omni in Atlanta Georgia. It was a memorable evening since I also met 16 year old Joe Bonamassa prior to the Stones show, as he was playing the Cotton Club in Midtown with his band Bloodline. Since then Joe has become the undisputed number one Blues Rock guitar player in the world and a potential headliner for our Amelia Island Blues Festival next year September. If you don’t believe my statement on him being the top blues guitarist in the world, go see him on December 3rd at the Florida Theatre and be prepared to be blown away (if there are still tickets available).

Back to Michael who enjoys life in Miami’s South Beach from where he travels across the globe to follow the Stones and Pink Floyd primarily. Ten days ago he sent me a story as a head’s up by Jonathan Valania in the Philadelphia Inquirer that made me pull out my Bucket List to make a new entry.

The story was titled: The Wall is mighty mighty and it talks about Pink Floyd’s Roger Waters’ new production of the Wall album Live on Stage.

I saw the original Pink Floyd the Wall Tour on Valentine’s Day 1981 in Dortmund Germany and after reading this review I think I have to come full circle and see it again.

Here is what Valania wrote:

Thirty years after its release, The Wall still looms large on the cultural horizon, a forbidding totem marking the zenith of rock’s commercial and artistic ascendancy.

Never before (and probably never again) had a double album of such  dark and potent ideas – the brutal profiteering of war, the magnetic  allure of suicide, the emotional fascism of celebrity – become a  mega-selling pop-music blockbuster. That it happened once still  beggars belief, and yet the album has gone on to sell 11.5 million copies.

Still, The Wall ain’t what it used to be, literally and figuratively.   Though originally released as a group effort under the Pink Floyd  brand, The Wall always was essentially a Roger Waters solo album, a  private exorcism of all the demons that tormented him: the war pigs  that devoured his daddy, the overbearing mother who smothered him in  hugs, the sadistic teachers who poured their derision on everything he  did, the women who seduced and then betrayed him, and the  megalomaniacal fame that warped him. Each one another brick in the  protective wall of isolation he erected around himself.

But the concept album to end all concept albums has proven malleable  enough to survive the new contexts Waters would find for it, such as  performing it amidst the ruins of the Berlin Wall in 1990. Today, the  titular wall has come to stand for the false dividing lines of  nationalism, consumerism, and sectarianism that keep us separated and  scared in a turbulent world of perpetual war, religious fanaticism, and panicked buying and selling.

Such was the case Monday night at the Wells Fargo Center, where Waters  staged The Wall as thrilling live spectacle, with eye-dazzling  pyrotechnics, three-story-high puppets, high-def projections,  mesmerizing audio and a gigantic white wall erected brick by brick  during the course of the concert until it completely separated the  performers from the audience, only to collapse spectacularly at the  end.

As a musical performance, The Wall live is a flawless re-creation of  the album, with Waters and his crack 12-piece backing band sounding  tight as a tourniquet and delivering note-perfect fidelity, down to  the smallest sonic detail. As spectacle, it is peerless in this  concert season, or any in recent memory, for that matter. The sheer  scale of the production – the fighter plane that crashes into the  stage during “In the Flesh,” the towering menace of the puppetry  during “Mother” and “Another Brick in the Wall,” the cinematic sweep  of the animations (most notably the ominous marching hammers and the  copulating flowers), and the sheer enormity of the wall itself - matches the outsized thematic scope of the piece, which is to say  everything that’s been going on in the world during the first bloody,  awful decade of the 21st century.

Everyone should see it once before they die.