Apple CEO Steve Jobs is SmartMoney Person of the Decade

Steve Jobs deserves every accolade he gets. His vision and team player capabilities has made him the CEO of the Decade with a 700% increase in Apple stock values. 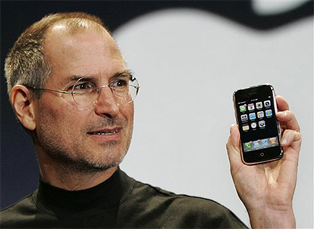 Few CEO's Before Him ever were more visionary

My faith in common sense is partially restored. With the election of Steve Jobs as the Man of the Decade, elected by a a full 30% of SmartMoney readers participating in our Person of the Decade poll, my faith in personal awards for accomplishments has been revived a bit. Certainly, Jobs accomplished more than probably any other CEO since he returned to Apple (AAPL: 214.01, +1.56) in the late 1990s: Not only did he revive sales at the then failing computer company, he led the stock to a more than 700% increase in value, and forever changed the way people buy and listen to music. The current hype about the soon to be unveiled Apple Tablet, has many in the world of communication wondering where Apple is going to lead us now. But few doubt this charismatic visionary’s grip on the world of computing and communications. He was for the last decade what Lee Iacocca was in the eighties.

Second place fell to value investor Warren Buffett, with 17% of the vote. Faith in the Oracle‚ÄÑof‚ÄÑOmaha definitely paid off for investors holding shares of Buffett‚Äôs pricey Berkshire Hathaway (BRK.A: 98550.00, +20.00, +0.02%) stock. The share price has risen 83% over the decade, surpassing $98,000 per share and surviving a strong dip when the financial crisis hit. Buffett has also made some wise moves during the crisis, including his $5 billion investment in Goldman Sachs (GS: 164.12, +0.36, +0.21%). Buffett acquired warrants and preferred stock in Goldman that pay a 10%‚ÄÑdividend. He also received warrants to buy $5 billion more in common stock at $115 a share ‚Äî a deal that far surpassed the benefits of the U.S. government‚Äôs TARP investment in the investment bank.

A surprising thirteen percent of readers voted Ben Bernanke as Person of the Decade, a hard to swallow choice ‚Äî¬†placing the Federal Reserve chairman surprisingly ahead of Google (GOOG: 619.40, -3.47, -0.55%) founders Sergey Brin and Larry Page in our poll. Only 12% of readers participating voted for Brin and Page, despite naming the Google IPO as both the Smartest Financial Move of the Decade, and the Smartest Investment of the Decade.
A total of 9% believed Microsoft (MSFT: 31.39, +0.22, +0.70%) founder Bill‚ÄÑGates should take top honors. Gates stepped out of the daily management of Microsoft in June 2008 to work full time with the charity he created, the Bill and Melinda Gates Foundation¬†‚Äî now the largest private foundation in the world, with an endowment of more than $35 billion.

SmartMoney readers were pretty unenthusiastic when it came to notable investors Bill Gross and Bill Miller. Only 4% of voters picked Gross, the billionaire financier, as the Person of the Decade. And a mere 1% thought investor Miller, the famous Legg Mason value investor, should take the prize, despite the fact that his investments are on the rise. Miller’s flagship Legg‚ÄÑMason‚ÄÑValue‚ÄÑTrust (LMVTX) is up 38% on the year, as of November.