Auditions for Arsenic and Old Lace will be held on March 20, 2016, on the main stage of the Amelia Community Theatre. 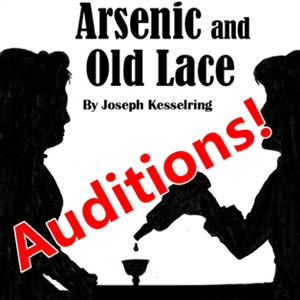 Auditions will be held on March 20, 2016, on the main stage of the Amelia Community Theatre, for Arsenic and Old Lace.

Story:
The elderly Brewster sisters lace their homemade wine with arsenic to end the loneliness of lonely old men. Their bugle-blowing nephew thinks he is Teddy Roosevelt and the cellar is the Panama Canal. Another nephew is a criminal who looks like Boris Karloff, and nephew Mortimer is a drama critic. No wonder this is one of the most popular comedies ever staged.

Directed by Ron Kurtz, auditions will be held at 4:00 p.m.; in addition to reading from the script, those auditioning should prepare a one minute monologue that may be memorized or read. Eleven men and three women are needed for the cast.

Characters:
Abby Brewster: A darling lady in her sixties who poisons elderly men. Abby is the sister of Martha and an aunt to Teddy, Jonathan, and Mortimer.

Martha Brewster: A sweet elderly woman with Victorian charm who poisons elderly men, Martha is the sister of Abby and an aunt to Teddy, Jonathan, and Mortimer.

The Rev. Dr. Harper: Minister and father of Elaine

Teddy Brewster: Nephew of Abby and Martha Brewster, Teddy is a man in his forties who thinks that he is Theodore Roosevelt.

Elaine Harper: An attractive girl in her twenties and Mortimer’s fiancee, Elaine is the daughter of the Rev. Dr. Harper. She is surprisingly wise in the ways of the world for a minister’s daughter.

Mortimer Brewster: Nephew of Abby and Martha, Mortimer is a drama critic who is engaged to Elaine. He is a nice man who cares for his aunts.

Mr. Gibbs: A man who wishes to rent a room from the Brewster sisters

Jonathan Brewster: Nephew of Abby and Martha Brewster, Jonathan is a psychopath who has had plastic surgery and now looks like Boris Karloff.

Dr. Einstein: A plastic surgeon and an alcoholic who is in his fifties, Dr. Einstein has changed Jonathan’s face three times.

Officer O’Hara: A police officer, O’Hara is a would-be playwright who pesters Mortimer to read his play.