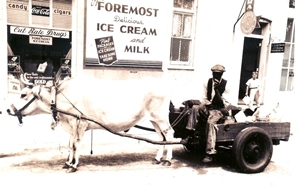 Growing up in Fernandina was an adventure that any kid would love. Everyday was an adventure and we were always excited planning our next one. One of the sites we would always see around town was an old black gentleman named Arthur. He would travel around town on an old wagon pulled by an ox. Arthur would pick up food that restaurants had thrown away to take back home for hogs that he was raising. Arthur was a nice man, and would always talk to you for a moment on his rounds. His old wagon had automobile tires on it and many times you would hear him coming before you would see him because he would have buckets and pails hanging on the side of the wagon that would clang as he traveled.

The population was nothing like it is today; I don‚Äôt think Arthur would make it today trying to maneuver his wagon and the ox around town. In fact, I don‚Äôt think Arthur would even recognize the Island today; a lot has changed over the years. The above picture was taken on the NW corner of Fourth and Centre Streets across from the Post Office. This was the site of Waas Drug store. The doorway that is behind Arthur (boy standing in doorway) was the entry way to the upstairs office of Dr. Carl Lungenhouser, who delivered many of the children who were fortunate enough to grow up in Fernandina. Centre Street was straight and there were awnings covering most of the sidewalks in front of the stores.

There were so many places to visit as a child, Gene‚Äôs was known as the biggest littlest store in the world and was located between Second and Third Streets. It was always great to stop in there at least five times a day for a piece of candy or soda, and to look at the bicycles that he had on display and dream of what Santa would bring, maybe one of those bikes. You could always stop by Lockwoods Drug store, NE corner of Third and Centre and Mr. Lockwood would mix you a cherry or vanilla coke, (yes mix it, soda jerk type of mix). As late as 1967 you could still stop by for one of those great mixed drinks, nothing you buy today in the can or bottle even comes close to those hand mixed sodas.

In 1967, Arthur‚Äôs ox passed away. Needless to say, but it was a job to bury an animal that large. I had finished a tour of duty with the US Army and was back home building boats. I got a call that help was needed to bury Arthur’s ox. Several men pitched in and the job was completed, with the help of a backhoe. Yes, Fernandina was a great place to grow up and Arthur was one of many unique things that set us apart.