As the Pigs are Pushing the Eurozone to the Cliffs

When the Eurozone became reality it gave the power to regulate to Brussels, but not the power to tax its members. Now that's threatening its survival. 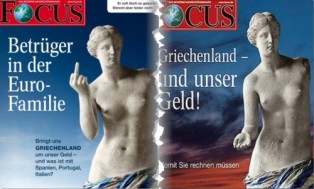 German Press: ConMen in the Euro Family. Is Greece Killing our Currency? And what about Spain, Portugal and Italy?

One of the perks in our decision to accept the offer to manage Amelia Oceanfront Bed and Breakfast late last year, was interaction with our guests. Bed and Breakfast guests are often decidedly different from Resort Guests. They appreciate an informal glass of wine on the beach patio in the sunset and a good happy hour conversation
They are inquisitive, eager to immerse in local color information and on average well read and knowledgeable about many different topics. We have not been disappointed so far.

Friday afternoon we had an unscheduled walk-in from a nice Canadian couple with a successful fashion store on the shores of beautiful Lake Huron in the city of Southampton, just northwest of Toronto  and over Happy Hour with a good glass of wine we found ourselves in an interesting conversation that ranged from the Florida primaries to whatever happened to Greece and the Eurozone.
This coupled was very well traveled on both sides of the Atlantic with frequent shopping trips to the fashion capitals of the world, so it surprised me a little that even they had lost track of the ongoing Euro crisis. Truth be known so are most people here, since the media only report financial news in a classical way, which means covering extremes between the good guys and the bad guys. They’re not interested in what’s happening in the margins or in the middle, because that is not news to them, even though that’s where the telltales in society give perspective to what lies ahead of us.

And in the middle is where Europe’s problems are escalating beyond just the pigs. Northern and Western Europe have in recent decades been following the exact same path as Greece, Portugal, Spain, and Italy – “the notorious bad guys.” In the entire Eurozone (as in the USA) it’s the same story of excessive spending programs, disastrous labor laws, and widespread government interventions. No I’m not talking about socially supported entitlements. Personally I think any government that picks up a weapon to defend its citizens, should first and foremost provide healthcare as a priority for its citizens wellbeing. Both are about providing the country with welfare and protection.

When countries like the ones in Northwestern Europe spend only a relative pittance on defense, a lot of money becomes available to bring well-being to the margins. After the second World War Northern European countries for decades did not spend on the military complex and therefore amassed enough money to provide healthcare to its citizens and when the Eurozone initially became a potential opportunity for political grand standing, there was money available to embrace the southern European region into the fold of charity and entitlement. The Eurozone was ultimately going to be like the United States, the United States of Europe. That was the plan; thankfully executed ass backwards.
What did the politicians do? They gave the Eurocrats in Brussels the power to regulate, but without the power to tax, the formation of the Empire was doomed from the early days on. Just a matter of time. To create a Euro currency without the power of a European Treasury behind it, is absolutely ludicrous.

Personally I’m happy that they omitted to close the loop because it would only have lead to the formation of a European army and more meddling and there is really no telling what that would have brought to the global escalation of armed conflicts.

So here is the historical picture in a nutshell: the power to tax is an essential, defining characteristic of the nation-state, absence of which is the reason why the EuroZone initiative is collapsing.
Since WorldWar II, large amounts of economic revenues in especially North and Western European Countries have been alloted for Social Welfare, Education and occasionally rather stupid entitlements (in Holland there was a time you were paid to be a student) rather than purchasing armaments. Having witnessed the horrors of war on their own land, Europeans were not to excited about the US-USSR Cold War antics. So while the US built a military empire, western Europe built a social welfare empire. Both turned excessive with dangerous side effects of which we will see the unfolding in the next 5 to 10 years. Will we become a reflection of Europe with some country specific mutations or will we go down as an empire that could not strike a balance between conservative polarization and welfare foolishness, or will we finally learn what government is supposed to guide and protect, versus the excessive meddling into affairs that is essentially none of government’s business.

My Canadian friend, remember this story originated on our beach patio, voiced the media impression that if Greeks would simply start paying their taxes, the problem would quickly go away. Not so. Greece, in an important way the birthplace of our democracy, has many libertarian tendencies that demand small government and very limited meddling. In a perverse way, even the Junta Military Governments of the past were hardcore conservatives who preferred small government.

People is Greece are at a lunar distance from the people in Scandinavia. Nothing really makes them compare to a Norwegian or German. Not their lifestyles, not their homes, not their wardrobes, not their eating culture, not their educational, religious or culture history. Who on earth, except for idiot politicians, would ever try to force congruence into these opposites, rather than let time take its course.

The difference for Northwest Europe is, their economies have been much stronger as a result of historically different productive mentalities. Yet there is no doubt in my mind that if you’re following the same stupid policies, you should expect the same bad results. It’s logically inconsistent to assume that certain Eurozone policies are absolute failures in Greece, but magically work in France or Germany. Since becoming part of the Eurozone, Greece essentially tried to mimic Western European policies on an Eastern European budget when they became part of the Eurozone, but that doesn’t work.

The financial pressures of the Eurozone is now forcing the rest of Europe has to start walking a fine line when it comes to implementing more social programs, because the entitlement cracks are getting visible in all of Europe.

Greece is a lost case for the Eurozone and the Canary in the Coal mine where the future of the Eurozone is concerned. Italy, Spain and Portugal are next in line and obviously pro Euro politicians do not want to end up with the black eye of a failed and very costly experiment. Which is why in a last ditch effort printing presses are heating up to preserve the Euro currency (and only temporarily at best) as the European Parliament will try to secure the power to tax. Good luck with that one!

But as far as the press is concerned, some countries are racing for the cliffs and others are walking. When the first ones go over the cliff they’ll be frontpage news again; for a short while at least. Than there will be a period of anger with the politicians for having “forced” the people into the historically unnatural alliance of a Eurozone and then life will go back to affordable vacations in Greece, Italy, Spain, Portugal and even France and a return to making nature’s best wines and cheeses instead of Airplanes and other Industrial manufacturing that requires focus and precision to the extend of OCD.

The Eurozone will vanish into the history books as another experiment in “one size fits all” mediocrity, a philosophy that wrongly assumes that what works in one location, also will work somewhere else. It assumes that the German production mentality can be injected into the Greek population with their morning cereal or Happy Hour Ouzo. It won’t work. And before some readers with Greek roots start shooting of angry emails at me, they should realize that their ancestors moved away from Greece for the reason of being different than the age old accepted culture of leisure and laissez-fair.

The Eurozone will ultimately collapse because it became a forced alliance of very different cultures being regulated
by the same “one size fits all” philosophy and with the intention to prevent future wars.

Here in America we’re on the exact same path however, gravely underlined by the fact that last Wednesday Bernanke and the Feds announced that they would keep the federal funds rate between 0 and 1/4% at least through 2014, which also translates to cranking up the printing presses again. Of course the empire called USA has the power to tax, in contrast to Europe, but much of the federal revenues in last century have been “wasted” on unprecedented military build up, instead of welfare of its citizens, like in Europe.

So here is the bright side of the equation, Europe can’t really afford an army, having spend fortunes on entitlements and social programs. America can’t really afford an arms race any longer, unless the republic accepts that we become like North Korea, where every privilege belongs to the military and the rest of its citizenry are second hand citizens.
As a lifelong peace activist I consider the bright side of all these governments being bankrupt: They spend so much on welfare and debt service that they are unable to afford much warfare… And that makes welfare and debt good things, in a perverse way. Maybe US Secretary of the Treasury Tiny Tim Geithner should keep that in mind when he pressures Europe to increase its crisis firewall and boost bailout funding. There are always at least two sides to every story.