Amelia Concours d'Elegance, In the News 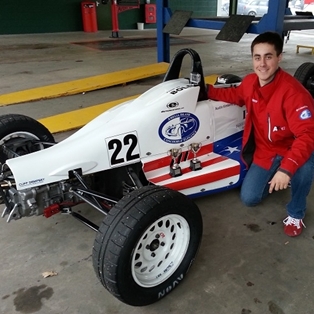 The three-race championship-deciding weekend format favored Kimberly’s now trademark lightning starts. The freshman engineering student at Roger Williams University (Bristol, RI) rocketed to a first lap lead of almost a second in the first race, and over 1.2 seconds in the second lap, and stayed in front until the checkered flag. The third race of the championship weekend found Austin on the podium with a championship-clinching third place finish.

On the victory podium Kimberly gave much of the credit for his remarkable record setting performances to his team, “This championship could not have happened had it not been for Cliff Dempsey [Racing] and his entire organization.”

“As a charitable foundation, we are particularly interested in supporting the ambitions and dreams of young people who wish to enter the various automotive fields,” said Bill Warner, Founder and Chairman of the Amelia Island Concours d’Elegance. “Austin is in his freshman year of engineering studies and has taken the first big step toward his goal of becoming an engineer and racing a Chevrolet Corvette in the 24 Hours of Le Mans. Everyone at ‘The Amelia’ is extraordinarily proud that he’s carrying our colors.”

Since 1996, the show’s Foundation has donated over $2 million to Community Hospice of Northeast Florida, Inc. and other deserving charities on Florida’s First Coast. The 19th annual Amelia Island Concours d’Elegance is scheduled for March 7-9, 2014. For more information, visit www.ameliaconcours.org.