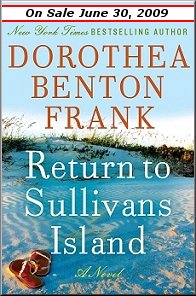 New York Times Best Selling Author, Dorothea Benton Frank, will be speaking at a luncheon at the Ritz Carlton, Amelia Island, on Wednesday, July 15. Tickets are only $50.00 for this Amelia Island Book Festival event. Copies of her newest book, Return to Sullivans Island, will be on sale for $25.00 and the first chapter is available on her Web site.

Before she began her writing career, Ms. Frank was involved extensively in the arts and education, and in raising awareness and funding for various non profits in New Jersey and New York. At the present time she serves on the Boards of the South Carolina Coastal Conservation League and The South Carolina Historical Society.

PRESS RELEASE: Dorothea Benton Frank first began to enchant and delight readers with her tales of life in Lowcountry South Carolina with the publication of her first book, Sullivan’s Island, in 1999–which now has over a million copies in print. And with RETURN TO SULLIVANS ISLAND (William Morrow; On Sale June 30, 2009; $25.99; Hardcover; 2009) ten years and ten New York Times Bestselling novels later, Frank has returned to Sullivans Island for the long awaited sequel. Now fans of all her previous books and fans still waiting to discover her work can read the story of the next generation of Hamiltons and Hayes and their beloved home on Sullivans Island, the Island Gamble.

With her mother, Susan, leaving for a year in Paris and her Aunt Maggie, Uncle Grant, and stepfather Simon moving to California, Beth Hayes, newly graduated from college, is chosen‚Äì‚Äìwithout her consent‚Äì‚Äìto keep watch over that great house on the shore while her mother finally gets to do something she’s always wanted to do: live in Paris.
There is much about life and her sprawling Irish Catholic family’s past that beth does not know; ignorance and na√Øvet√© that nearly causes her to lose both her inheritance and the house. But you can rest assured, just like in all of Frank’s novels, there are friends both expected and unexpected‚Äì‚Äìor even unexplained‚Äì‚Äìto help her through the challenges she faces.

Over the course of one fast-paced year, Beth learns what it means to grow up, to fall in love, to suffer heartbreak, and to embrace responsibility for herself and those she loves. And readers are sure to fall in love with Beth and RETURN TO SULLIVANS ISLAND just as much as they have with all of Frank’s previous novels. This is Frank’s most charming book to date.

About the author:
Dorothea Benton Frank was born and raised on Sullivans Island, South Carolina and resided in the New York area with her husband. She is the author of the bestselling novels: Sullivan’s Island, Plantation, Isle of Palms, Shem Creek, Pawleys Island, Full of Grace, The Land of Mango Sunsets, The Christmas Pearl, and Bulls Island.