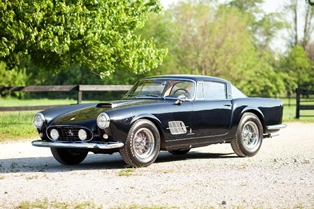 “We are delighted to present more than 15 collector-quality Ferraris at our Pebble Beach Auctions this year,” says President and founder David Gooding. “These ultra-rare, low-production Ferraris, such as the ’50s- and ’60s-era show cars we’re offering, will continue to hold their value and reward those with a passion for the best.”

The short wheelbase 410 SA, Ferrari’s last Lampredi-engined car, was not designed for the faint of heart, as it was one of the only cars in the 1950s capable of reaching speeds well in excess of 150 mph. One of only eight Series II 410 Superamericas built, this 410 SA was first introduced at the 1957 Paris Auto Show, handsomely finished in black with natural leather interior. It was sold new to an American buyer and later acquired by the famous oil magnate H.L. Hunt. It has been enjoyed by the same family since 1969 and will be presented at auction for the first time ever. With original paint and less than 19,000 miles, 0715 SA is one of the finest surviving coachbuilt Ferraris in existence and has earned prestigious Preservation Class honors at the Pebble Beach Concours d’Elegance, Ferrari Nationals and Concorso Italiano. Its estimate is available upon request. 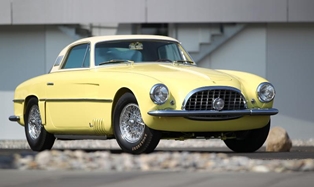 One of the last Vignale bodies commissioned by Ferrari, this powerful 4.5-Litre, Lampredi-engined, 375 America represents a high-point of Italy’s coachbuilding and performance prowess in the early 1950s. Originally displayed at the 1953 Torino Motor Show, it looks the same today as it did then, having been restored to the highest possible standard and finished in the same refreshing pale yellow over cream with green interior that Vignale intended. An exceptional and rare Ferrari with strong provenance, it has taken home a Platinum Award from the FCA Nationals, as well as prestigious Enzo Ferrari and Best in Class awards from the Pebble Beach Concours d’Elegance. Its estimate is $2 million – $2.4 million. 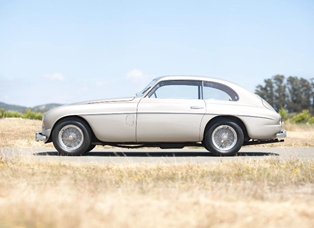 When it replaced the famed 166, the 2.3 litre, V-12, 5-speed 195 Inter was one of the leading touring cars of its day, only attainable to an elite class. The first 195 Inter built, this matching-numbers car was one of only three examples bodied by Touring of Milan. Following a complete 2008 restoration, the distinctive Ferrari has the same light-metallic gold finish and unique features that it had on the Touring stand at the 1951 Torino Motor Show. Notably, this FCA Platinum Award-winning car has been shown at the Pebble Beach Concours d’Elegance and the Cavallino Classic. Its estimate is $900,000 – $1.2 million. 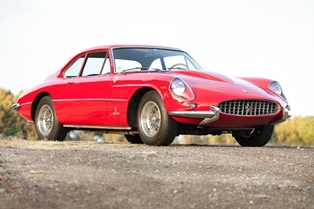 The 1963 Geneva Motor Show car, this 400 Superamerica Coupe is one of only 14 covered-headlight Aerodinamicas bodied by Pininfarina, an exceptional hybrid design that masterfully blended Ferrari’s legendary performance with the finesse of a luxury road car. After initially being sold to an Italian buyer, the car spent many years among American enthusiasts. The car remains a correct, matching-numbers, original-bodied example and is eligible for a wide variety of tours and events. Its estimate is $1.2 million – $1.5 million. 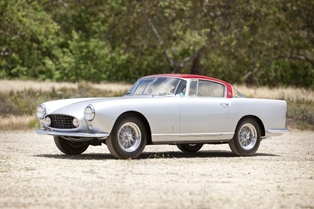 Pinin Farina’s 1956 Geneva Motor Show Car
Pinin Farina designed this versatile driver’s car in 1955 as the prototype for Ferrari’s latest series of 250 GT models. As a pre-production model with several noteworthy features, it was displayed at the 1956 Geneva Motor Show, sparkling in the same compelling color combination it wears today – silver capped by a cherry-red roof. It features a competition-derived engine and has been certified by Ferrari Classiche as a correct, matching-numbers example. With an ownership history strongly rooted in Southern California, this fully-restored, FCA Platinum Award-winning car has participated in the Mille Miglia Storica four times, as well as the California Mille. Its estimate is $650,000 – $800,000.

The 2011 Pebble Beach Auctions will take place on Saturday and Sunday, August 20 & 21 at the Pebble Beach Equestrian Center, located at the corner of Portola Road and Stevenson Drive. Preview days will start on Wednesday, August 17 continuing through Sunday, August 21. The auctions will commence at 5:00 p.m. on Saturday and 6:00 p.m. on Sunday. Gooding & Company’s Pebble Beach Auctions catalogues are available for $100 and admit two to the viewing and the auctions. General admission tickets to the viewing and auctions may be purchased on site for $40. Auctions are broadcast live from Gooding & Company’s website. Bidder registration forms, press credentials and additional auction information are also available on Goodingco.com or by calling (310) 899-1960. For additional vehicle information and up-to-the-minute results, follow Gooding & Company on Facebook and Twitter @GoodingCompany.