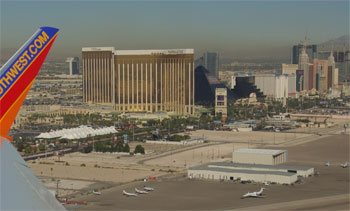 On the eve of our Editor and Ad manager taking off with friends for a well deserved trip to Sin City, I did some research into LV’s current economic status and found that the city in the desert that exactly one hundred years ago had 30 inhabitants, is apparently finding redemption for its recent extravagances by quickly slipping out of the luxury lifestyle and back to the bargain basement. Fast food is up, fine dining is down and hotel rooms are available for under $50 in a city that has been wooing recession-weary tourists to come back and play the quarter and nickel slot machines with a sense of desperation relief.

Value is the message on The Strip this year, as customers demand the same type of service and quality for half or less of the price. Jack Daniels or Smirnoff are being peddled at around $45 a bottle, a far cry from the not-too-distant past when the gambling resorts marked up liquor by hundreds of dollars a bottle and patrons couldn’t empty them fast enough.!!

That all has changed now.
Last January Las Vegas got really scared. The boomtown had come to a head on collision halt and across Las Vegas, casinos found consumers unwilling to pay premium prices for just about anything, from meals to hotel rooms, drinks and entertainment. Occupancy citywide dropped off more than 20 percent from the 90 percent-plus normally enjoyed by Las Vegas hotels. In an insulated self sustaining economy that would mean a harsh drop in profits, in the labor intensive world of leisure and entertainment a 20 percent drop in occupancy, immediately turns into severe losses at the bottom line, as there are very few cost savings measures available to reduce overheads. Just imagine closing the shopping part of Cesar’s Palace, or closing the convention hall or whole floors in a luxury hotel. Not much can be done to limit service without affecting the total operation.

But now an integrated strategy that casino executives laid out earlier this year is starting to take shape — offering bargains and fighting for visitors without spending much to build the next big attraction. ”Our challenge, like everyone else, is how do you create things without capital?” says Don Marrandino, head honcho of Harrah’s Entertainment Inc. ”In true gambler’s fashion, you’re dealt a hand, and you gotta play it.”
And in an economic downturn of the current scale, preserving the one pillar economy that Las Vegas represents, this can only mean : More Bang for the Buck. Much more that is. We’re talking 50% and more. Las Vegas’ eternal gratitude might include Southwest Airlines, which operates a gigantic hub at the Airport with many non-stop connections, one of them being from Jacksonville Int’l straight into Vegas for about $300 r/t.

As hotel-casinos from one end of the Las Vegas Strip to the other lowered rates, visitors have returned to cash in. By Spring, occupancy rose to 85.9 percent — and 92.5 percent on weekends a number that holds out during the week as well.
The average room cost about $92 per night, some 12 percent less than in January and a third less than a year earlier.
Executives say changing customer demands affect every hotel-casino, from the $159 per night Wynn Las Vegas to the Imperial Palace, where rooms can be found for $34 per night. The Imperial Palace is selling a package that includes a one-night stay with all meals at its buffet and a cafe and all drinks at casino and pool bars for $95.
The Luxor has used Twitter to push a $35 one-day pass to its buffet. Other MGM Mirage hotel-casinos offer all-day buffet tickets, and the Luxor’s includes beer, wine and champagne.‚Ä® Even Michelin-starred restaurants where dinner tabs run to $100 per person are offering fine dining at reduced, fixed rates.
The three-star Joel Robuchon at the MGM Grand is known for its $385 16-course meal and a $225 six-course option. But it recently introduced another menu for $89.
Visitors are more conservative with their cash, but they’re demanding the same experiences and quality they always , so wines and champagnes that once sold for $300 or $400 a bottle (and up) are now replaced with others that sell for $100 or $200.

Some bubbly is still in a bubble, even if 1000 percent mark up is now only 500. I guess some Brandname products don’t have a Storebrand Equivalent. Not yet at least.