Amelia Island and Fernandina Beach are getting a uniquely special taste of old Country tunes and sounds, when the famous Millennium Carrillon is making a one concert stop on the Historic Waterfront. 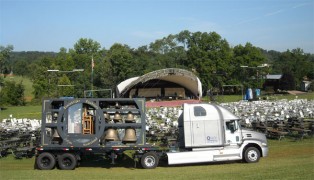 For a short time on Friday March 26, downtown Fernandina Beach will sound like Amsterdam, Berlin, Cork Harbor in Ireland or Paris France.

A once in a lifetime experience of Old World sounds blending into the gorgeous setting of the Fernandina Beach Marina, at Centre & Front Street.  Right around sunset, the Mobile Millenium Carillon, with 48 bronze bells, for a total weight of 26,000 lbs, will “sing” a variety of tunes, from classical to evergreens, thanks to Wylie Crawford, University Carillonneur at the University of Chicago, and President of the World Carillon Federation.

The one hour concert starts at 6:30 pm, and is free to the public. A limited number of complimentary chairs will be available. People are welcome to bring their own, and sit anywhere along the waterfront.
Close your eyes and let the bell sounds transport you to…  wherever you like: London, Paris, Amsterdam, Brussels.

The History of the Carillon

For centuries, long before the arrival of phones, radio and television, bronze bells were the bearers of good, and – at times – bad news. Churches and City Halls in Europe had at least one large bell to announce the time of day, or a church service, or a fire. For joyful events it became customary to ring several at once.

The idea of recreating and composing melodies on mutiple bells was an obvious one, but not until the 16th century did bell foundries in the « Low Countries » (now Belgium and the Netherlands) come to master the technique of tuning the individual bells accurately enough to create a harmonious sound.

The Mobile Millennium carillon was cast and built by Royal Eijsbouts in Asten, the Netherlands in 1992 and toured Europe for special events until 2008 when Lancaster, Ohio became its new home.

The larger of only two mobile carillons in the United States, it turns more than a few heads as it rolls down the road and has provided a unique sight travelling US highways from coast to coast to thrill audiences all across  America. The Mobile Millennium brings the carillon, a traditional tower instrument, down to ground level. The sensations of seeing the carillonneur play with fists and feet, hearing the bells and chimes, while actually feeling the vibration of sound, create a unique and dynamic musical experience.

There is only a limited (150) amount of free chairs available. Reserve your chair now by sending an email request to editor@searchamelia.com

Bells on the Riverfront in Fernandina Beach is a joint effort of the City of Fernandina Beach, the Historic Fernandina Business Association, Petanque America and SearchAmelia.com
For further info, call Philippe Boets at 904-491-1190 or email petanqueamerica@gmail.com