If the man in charge of finances worked for you, and failed in his duties, as Ben Bernake has, would you keep him on for another four years? 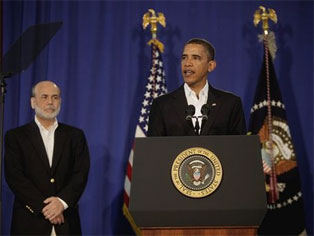 Remember the Northwest jet liner that over shot it’s destination by one hundred and fifty miles or so?¬† How about the Exxon Valdez, when it ran aground and spilled hundreds of thousands of gallons of crude oil causing a huge environmental catastrophe.¬† What about the two or three secret service folks who let the two uninvited guest to the State dinner at the White House a couple of weeks ago.¬†Now it turns out that that are 91 breaches in Whitehouse security since 1980.

What do they all have in common?¬† They failed at their jobs, something went terribly wrong because of their failures.¬† So what would have happened to these folks before we became a nation of soft and socially perverted people?¬† Would they continue to keep working?¬† Were they promoted?¬† Were they given more responsibilities?¬† The answer is absolutely not.¬† They were terminated.¬† Their credentials were pulled and in essence they were black balled from their particular profession.

Let’s talk about our economy for a moment.¬† Would you agree something has gone wrong?¬† Is it fair to say that the ones in charge have not done a very good job and now the entire country is paying the price.¬† If the man in charge of finances worked for you, and failed in his duties, as Ben Bernake has, would you keep him on for another four years?¬† I don’t think there are many reading this, that would agree they would consider keeping him on for even one day longer then absolutely necessary.¬†Cleaning out their desk and escorted to the exit door, would be the preferred course of action. The sensible, business thing to do would be to replace him immediately.¬† Bring in new blood with new, preferably proven, ideas.¬† Not retaining someone who has demonstrated consistently he can’t do the job.

Are we the only ones to see this?¬† Why can’t our leaders in Washington see it, or would that just simply break the chain of BAU,¬† (business as usual).¬†¬† Ben Bernanke has been given four more years as head of the FED.¬† Yes, four more years of the same oId thing.¬†¬†Oh don’t get me wrong, there are¬†many who are celebrating this¬†re-appointment.¬† Of course most of them are on Wall Street or in Washington.¬† I¬†think perhaps if we truly want to start solving¬†our problems¬†then we need to start with Congress.¬† I say term limits and they all need to go, 2010 would be a great year to start.¬† Just a thought.