Bernanke tells economy to go have a party

When Fed Chairman Bernanke let new quantitative easing out of the bag to prevent the economy from sliding back into a recession, Wall Street knew it was looking at good times rolling back in. 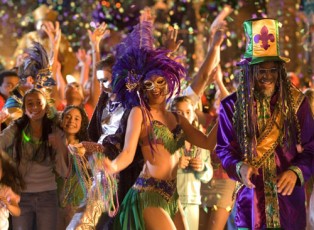 I have always been intrigued by the exact moment that people collectively become tired of a direction they were moving in and abruptly turn away. It’s like studying the herd to see if the ensuing stampede is directed by a leader or driven by fear.

I think the economy as people perceive it, has reached that point. We all agree that fundamentally nothing has changed from the early days of the Obama presidency, yet the Dow average is flirting with 11,000 and prediction is that there is money to be made. Economic foundations have not been drastically altered and we have been floating (more or less) on up-and-downwaves since the beginning of 2009. We still have to burn more hype out of the previous bubble and this year felt a bit like on a cruise ship in rough weather at times, holding on to your food plate while occasionally spilling some of your drink.

Yet for some reason we have noticed in the past 8-10 weeks that we seem to be in calmer waters and experience weather with a little sunshine in the morning sky.
Obviously the question is if this sentiment is real or imagined?

Well for Wall Street it is as real as a heart attack.

We all have empirically experienced a disconnect between Wall Street euphoria and Main Street’s confusion as Fed Chief Bernanke has clearly announced that he will throw his entire gourmet kitchen sink towards the economy if it threatens to slide back into a deeper recession. Anyone who has ever studied Bernanke and his work on the Depression years knows, that the man is deadly afraid of the word Deflation. He’ll rather face a galloping inflation that a minor deflation, because that economic condition would politically cost him his scalp.

Here is the simple reason: inflation will lower the government’s deficits in today’s currency, deflation will make it larger. And that is not good for Washington and the White House.
So he happily complies with White House demands, as the Dems are facing crucial midterm , letting every investor in the world know that he will do whatever it takes to keep the economy from further stalling. So investors can’t lose for winning.

If you have some cash, you may have a great Holiday Season

So, if you want a good holiday season and some extra money in the bank, you may as well join the herd for a while as they are stampeding towards more quantitative easing. That’s right. Today I am not going to tell you to sit back and be weary of motives and markets. Buy gold, buy shares, buy bonds, buy real estate, Bernanke has shown his hand and frankly there is not much to stop the train that will ultimately lead to the demise of the US dollar, so why not buy some insurance against that event.

Even though there are actually 3 economic scenarios that can play out, all of which spell longterm disaster, we have collectively kicked the can of responsibility far down the road for now, and decided to “laissez les bons temps roulez”.

It is a bit comparable to the words whispered into Louis XV’s ear by Jeanne Antoinette Poisson, Marquise de Pompadour, also known as Madame de Pompadour who was the official maîtresse-en-titre of Louis XV from 1745 to her death at age 42 in 1764. She is recorded as having said: Apres nous, le déluge; translated as “Who cares what happens after I’m gone”. The occasion for these words of wisdom was the French financial system being on the verge of collapse, which it did a bit later.

Well, there are quite a few here n this country who claim our financial system is on the verge of collapse as well, while others think that Bernanke is a Hero Time will expose.

The story in the investment world today is that we have two possible economic scenarios, and guess what? both are bullish for all investments…

The first situation is simple: The economy recovers and all investments go up… Corporate earnings grow, and that pushes up stock prices. Commodity prices go up, too, as a growing economy increases demand for commodities.

The second situation is also simple: The economy falters, so the government and the Feds pull out all the stops to “ignite” it. The popular term for it today is “quantitative easing,” which is everything from “printing money” to buying investments with the goal of propping up their prices.

Let’s face it, investors don’t care about long term, unless you have the stretch of a Warren Buffett. Most investors however live by the “Who cares what happens after I’m gone” formula. Consequently they know the government will prop things up… so the downside of what’s going on is limited. Federal Reserve Chairman Ben Bernanke has essentially promised to eliminate all downside risks.
Now investors know that staying in money while its value depreciates is dumb, so they will want to go out of cash and empty their bank accounts in favor of positions in gold, stocks, bonds, real estate…uh you name it.

So here you have it: everything goes up and you can’t lose…period!

Of course the smart ones among us realize there is a third scenario that nobody wants to face: Bernanke throws his kitchen sink and the economy still does not pick up!! But currently this scenario does not worry the investor, because at the first raunchy whiff that trouble is here to claim its position, they will get out of their positions real quick.

When Bernanke tipped his hand, stocks and bonds started rallying. September, usually a dead month in southern Manhattan’s financial district saw the best stock gains since the depression, all while housing foreclosures were still climbing to astronomical numbers. Now since last week housing foreclosures have been halted almost on a nationwide scale. Is there anybody else out there besides me who thinks we’re witnessing a major economic play in which the inflationary injection promised by Bernanke will bring residential pricing in the next year or so back up to previous levels, albeit with a dollar that lost a major percentage of its purchasing power in the manipulation.

If you want to fence that loss off, you may want to get on board of this bull market in about everything you can lay your hands on. It’s going to be dancing in the streets for a while.
Some say it’s going to last for quite some time, but nobody knows when the deluge is expected. I would suggest to get out by the time Bernanke’s printing presses break down from overheating.