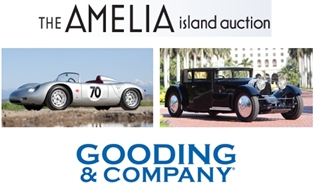 Auction catalogues cost $75 and admit two to the viewing and auction. General admission tickets to the viewing and auction may be purchased for $30 per person. Bidder registration forms, 2011 press credentials and additional auction information are available on www.goodingco.com. For additional vehicle information and up-to-the-minute results, follow Gooding & Company on Facebook and Twitter @GoodingCompany.

“We achieved great results and received a tremendous positive reaction following our 2010 Amelia Island Auction,” says David Gooding, President and founder of Gooding & Company. “Our team is thrilled to return to the enchanting Omni Amelia Island Plantation this March, when we will be bringing more of the world’s very best examples to auction.”

The auction house created waves on the Atlantic coast at the last Amelia Island Auction with more than $16.14 million in sales for 58 lots sold, setting world records for the weekend’s top-selling $2.75 Million 1931 Voisin Mylord Demi-Berline and the $1.705 Million 1961 Porsche RS61 Spyder purchased by the legendary Sir Stirling Moss.

-The stunning 1949 Jaguar XK120 Alloy being offered in March is one of the oldest surviving examples, the first XK120 ever imported to the U.S. and the only example finished in Blue Sheen paint. Initially delivered to influential New York foreign car dealer and racing enthusiast Max Hoffman, the car was used as a promotional model at early sports car races, including the 1949 Watkins Glen Grand Prix, where he drove it in the parade preceding the main event. The current owner has completed an exhaustive, multiple award-winning restoration, participated in the XK60 Diamond Tour and set a new record in JCNA Slalom. Its estimated price at auction is $375,000 – $550,000.

-“A better car does not exist the world over,” said Britain’s legendary Speed King Captain Sir Malcolm Campbell, referring to a Rolls-Royce Phantom II Continental Sedanca Drop Head Coupe. With its close-coupled body, two-position convertible top and low windshield, the Midnight Blue 1933 Rolls-Royce Phantom II Continental Sedanca Drop Head Coupe being offered remains one of the best looking cars of the period. It is a genuine, highly-desirable automobile with all its original parts and is one of four Sedanca Coupes designed by the legendary coachbuilder Gurney Nutting. The estimate for this exceptional classic Rolls-Royce is $400,000 – $500,000.

-The 1963 Lotus 23B is a powerful and agile race car, formerly owned by the legendary British race car drivers Brian Redman and Bob Snodgrass of Brumos Racing. Throughout the years, this car has enjoyed many miles of vintage racing and is still very capable. Following a fully-documented, two-year restoration in 2008, this Lotus is one of the best-prepared examples and is equipped with a 167 hp Ford-Lotus 1600 cc twin-cam engine. This car’s estimate is $175,000 – $225,000.

Gooding & Company, internationally celebrated for its world-class automotive auctions, provides unparalleled service in the collector car market, offering a wide range of services including private and estate sales, appraisals and collection management. The Company continues its successful association with ICAP Ocean Tomo, assisting in its auctions of intellectual property. The company set six new world records and achieved more than $114 Million in sales at its 2010 collector car auctions. Upcoming events include the 2011 Scottsdale Auctions on Friday and Saturday, January 21 & 22, 2011; the Amelia Island Auction on Friday, March 11, 2011 and the Pebble Beach Auctions on Saturday and Sunday, August 20 & 21, 2011.

Omni Hotels & Resorts creates genuine, authentic guest experiences that take guests on “A Total Departure” to 47 distinct luxury hotels and resorts in leading business gateways and leisure destinations across North America. From exceptional golf and spa retreats to dynamic business settings, each Omni showcases the local flavor of the destination while featuring four-diamond services, signature restaurants, Wi-Fi connectivity and unique wellness options. Known for its award-winning, personalized service, Omni leaves a lasting impression with every customer interaction, with a heightened level of recognition and rewards delivered through its Select Guest loyalty program and the company’s “Power of One” associate empowerment program. The brand is frequently recognized by top consumer research organizations such as J.D. Power and Associates, which ranked Omni as “Highest in Guest Satisfaction Among Upscale Hotel Chains” in its 2010 North America Hotel Guest Satisfaction Index Study (SM). To get additional information or book accommodations, visit omnihotels.com or call 1-800-The-Omni.