If you have never heard a large school of Black Drum, "drumming" as they swim past you, particularly at night, it is an eerie spectacle that literally vibrates your boat. 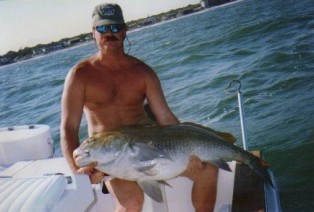 Black Drum fishing in northeast Florida has a rich history particularly in Nassau county where every spring beginning in February anglers brave colder temperatures and long waiting periods between bites in order to catch the early run of Black Drum which can commonly reach 70 to 80 pounds or larger.

I`m going to date myself a little here and recall the Nassau Drum fishing Club which was headquartered in an old two story building at the foot of the south end of the old bridge at the south end of Amelia Island. The Buchaneer Bait shop was nearby on the banks of Sawpit creek supplying live shrimp, Crabs and clams to fishermen launching boats on both the Nassau County and Duval County sides of the bridge. Although I never set foot inside the clubhouse, it was a legendary gathering place for those participating in the annual Black Drum tournament which ran for several months each spring.

Boats could be seen lined up in the Nassau river from Black Hammock on the west side of the bridge all the way to Bird Island on the east side of the bridge. Many anglers spent an entire week on the water competing in the event. This sight can still be seen these days when word gets around that the bite is on, usually during full moon phases. At night the twinkling of boat lights, and the sounds of voices and music, travel across the water lending a festive atmosphere to the night as anglers fish well into the wee hours of the morning and sometimes all night long. Adult beverages consumed in moderation may also contribute to the friendly competitive air among the armada of fishing boats.

If you have never heard a large school of Black Drum, “drumming” as they swim past you, particularly at night, it is an eerie spectacle that literally vibrates your boat. It is said that Drum rarely bite when you can hear them, but I`ve caught them “drumming” as well as not. 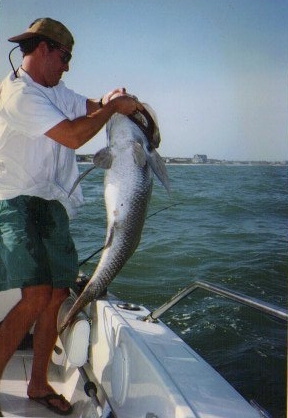 Other areas such as the north and south Jetties of the St. Mary’s inlet, Main Beach and deep holes in the channel off Fort Clinch also provide good Drum fishing. Whiting can be caught while waiting for Drum to bite and invariably a Drum will strike your whiting rig which is usually smaller and lighter than the 30 to 50 pound tackle deployed for Black Drum. Surf fishermen routinely catch monster Drum while fishing fo whiting. Fresh bait is the key, Clam innards, large shrimp, half a blue crab sans the shell, even conch. Here is one rule of thumb to live by when fishing for Drum, if you wouldn’t eat it don`t expect any self respecting fish to either.

Drum is also excellent tablefare, fried, broiled or baked. Cook it like you would Redfish. They are in the same family and as with Redfish, the smaller ones, for to 20 pounds are generally tastier than the older larger fish. For less “fishy” flavor, try to remove as much of the red parts of the meat as possible. Those areas are bloodlines and can contribute to strong flavor in cooked fish.

Any of the local tackleshops can easily show you how to rig for Drum and sell you the fresh bait required. Don Whitman at Leaders and Sinkers will be hosting the weigh-in for the 2010 Nassau Sportfishing Association`s Annual Drum Tournament slated to begin March 12th continuing through April 18th. A 80 pounder will be needed to compete with local Drum specialists. In recent years, a record 103 pound fish was taken at the St. Mary`s Jetties in early February, but was too early to be weighed in for the Tournament. The women’s world record for black Drum caught on 50 lb tackle is held by Stella Moore. Mrs. Moore caught the fish locally which weighed 96 pounds. Mrs. Moore herself weighed-in at 86 pounds; she also posted a 93 pounder in 1957.

As they say, “When the gnats start biting, so will the Drum”. I can testify that the gnats are hungry, so lets go fishing! Call me for a memorable fishing experience, both fresh and saltwater are fixin to bust loose!