Now that I have shared all of this information, do you think I am going to brave the lines to try to get a bargain? 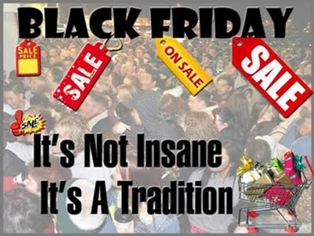 It has been years since I ventured out early in the morning on the Friday after Thanksgiving to shop, but I have really enjoyed getting all of the Black Friday sale ads in my email this year and seeing how the competitors plan to try to get the shoppers into their store to spend their money. Some of the retailers, such as Kohl’s, are going to open at 3am this year!

This “holiday” truly starts off the holiday shopping rush and retailers use it to gauge whether they will be in the red or the black for the quarter.

Although shopping local is what is best for our economy, it is nice to see what the “giants” can offer. To borrow from www.blackfriday2010.com, here are the Top 10 Tips and the Top 15 Deals for Black Friday.

1. Research: start your Black Friday 2010 sale research on Thanksgiving day or earlier.
2. Make a plan: identify what you want to buy, which stores have the best sales on Black Friday, and what time they open.
3. Timing is everything: arrange stores by opening time from early to late.
4. A fool and his money: be wary of Black Friday deals with quantity limits. If a store only has 10 items at that price, go elsewhere.
5. Visualize: know where your items are in the store.
6. Stay Safe: Previous Black Friday sales were honestly deadly; please don’t trample or shoot anyone!
7. Power of numbers: go with a team and attack separate stores or separate sections of the same store. Designate a meeting place.
8. Bring a snack: only amateurs stop at the food court on Black Friday! (Or the bathroom – so go before you leave.)
9. The quiet ones: don’t ignore stores that don’t advertise. They will have Black Friday deals too!!
10. Have fun: enjoy your family, friends and deals!

With Black Friday Ads in for most major stores, including Wal-Mart, Best Buy, Target, Sears and Kmart, the time has come to pass ultimate judgment. As expected, many of these are “limited quantity” door buster deals so please rely on the fine print and details in each specific ad.

Now that I have shared all of this information, do you think I am going to brave the lines to try to get a bargain? I will have to let you know. Meanwhile, Happy Thanksgiving and Good Luck!