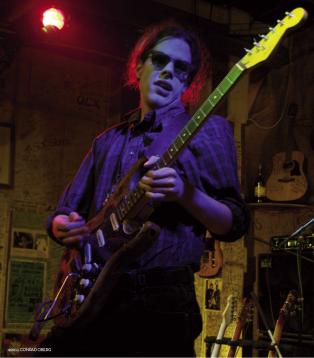 When he opened up the 40th Anniversary Celebration of Woodstock at Yasgur’s Farm in upstate New York, he selected Jimi Hendrix’s “Star Spangled Banner” tribute as his opening song and blew the audience and critics away. This was in the summer of 2009. Now two years later he will be playing the Amelia Island Blues Festival and do a Blues in Schools appearance here on Amelia Island in September.

Conrad Oberg was born in the Summer of 1994. As a result of profound prematurity, and weighing only a pound and a half, Conrad was left legally blind and fighting for his life. Conrad, has since battled every obstacle that life has presented, and despite it all has managed to take everything in stride and still come out grinning.

At the age of two, Conrad taught himself to play music on a hand-me-down toy piano given to him by his cousins. Conrad progressed quickly to a small electronic keyboard. Playing it non-stop, within sixmonths he could nplay all of the songs programmed into it by the manufacturer. By the end of his third year, Conrad could emulate anything he heard, ranging from Vivaldi to vacuum cleaners. A natural born performer, Conrad began performing in public at local music stores and weddings, and by the age of nine had developed a “one boy” piano and vocal stage act that became legendary in his hometown of Jacksonville, Florida.

Conrad’s first big break occurred when he recorded his first album at Sun Studios in Memphis, being backed by Jerry Lee Lewis’ touring band, which volunteered a great deal of their time to produce the album “Decade.” The album was completed at Sun, hours before Conrad turned ten years old, when he was given his first guitar.

Performing with the adult band that he fronts at venues and music festivals throughout the country, Conrad has been fortunate to share the stage with some of the legends of the music business, and has amassed a considerable internet following, with some four million worldwide views on YouTube.

In the past few years, Conrad has received accolades on an international level, being chosen by 12 million Cartoon Network viewers as the most talented teen musician in the country, and being selected by the Nikon Corporation to score the film accompanying their newest high-end camera release.

With the eyes of the world upon him, in August of 2009, Conrad was given the ultimate honor of opening the 40th Anniversary of Woodstock Festival at the site of the original Woodstock festival in 1969.

Conrad’s performance of the National Anthem, which he played at Woodstock in the style of Jimi Hendrix, received acclaim from the 8o+ international media outlets that covered the event, including Rolling Stone, USA Today, CNN, the New York Times, and the Washington Post. Conrad’s latest album, “Old School,” was recorded in non-dubbed single takes in order to capture the sound and feel ofConrad’s considerable live performing ability. The album consists of blues and rock classics which Conrad performs regularly at his shows in his own Jimi Hendrix meets Ray Charles style.

The album features Conrad on all vocals, keyboards and guitars. Conrad will be releasing this first all-original album in the Spring of 2011, and will be embarking on his second national tour later this Summer, a tour that will include a full feature appearance at the Amelia Island Blues Festival on September 16with a tribute to the greatness of Pinetop Perkins who recently passed away.