One part of the Amelia Island Blues Festival involves a performance from Conrad Oberg with members of the FBHS band. Practice was very promising. 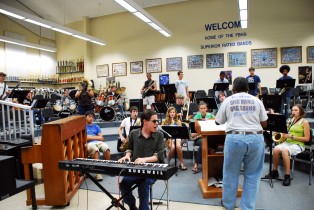 Walking into the Blues in School final rehearsal of the Fernandina High School Band members backing prodigy Conrad Oberg, was kind of a test for me to find out what to expect from their Saturday morning Blues Festival act coming week.

Well I was blown away, literally. Maybe I shouldn’t have been, but low expectations usually help me getting around disappointments. No need in this case however. What a well trimmed horn section can do to a Stevie Winwood oldie such as “Gimme Some Loving” is amazing. Inspired by Music teacher Rob, 15 students were there to build a big sound behind Conrad Oberg and it sounded great.

Conrad’s dad and manager Michael told me that his son had a huge smile on his face when the brass section opened up behind him. ” He loves that big sound”, he said. The choice of  Gimme Some Loving, Winwood did this at age 17 when he fronted the Spencer Davis Group in the UK, is clearly fed by Band Director Robinson’s love for brass instruments.

Now I’m not going to spill the beans on their set list, but I can tell you you’re going to love it. Band director Johnnie Robinson did an amazing job in the short time that the students started up school year. Of course 24 years of teaching and many awards later, Robinson, knows how to emphasize and motivate his flock especially when it involves his own specialty of the saxophone.

Blues in the Schools is an educational program that originated in 1999 in the Canadian city of Ottawa and was created to promote, preserve, and perpetuate the art, culture, and heritage of blues music and to examine the music’s influence on other genres. These days Cisco sponsored Ottawa Bluesfest brings artists/educators to town and pairs them with local musicians for a two-week residency in area schools. As we gain recognition over the years as the Amelia Island Blues Festival, we may want to expand on those ideas. The Annual Ottawa Blues Fest is a 12 day event, compared to our 2 day festival, so we have some room to grow.

Conrad Oberg and the FBHS Band will take the stage coming Saturday at the first Amelia Island Blues Festival at 11:30 in the morning.

Get your tickets now, while they’re still $15 for one day and $25 for two days. The price goes up at the gate. 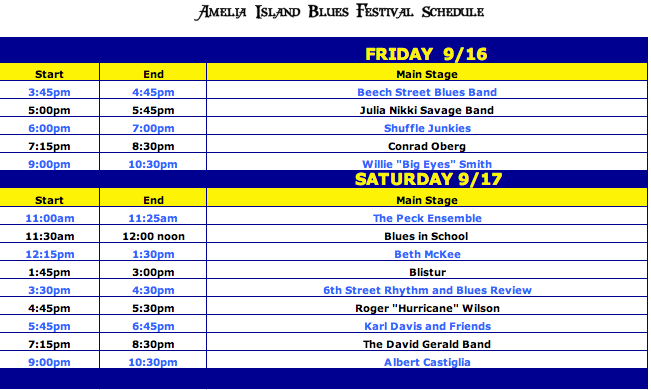