With the Web.com Tour Championship making its debut on Dye's Valley Course at TPC Sawgrass this week, comes a Live Concert from Legendary Blues Traveler. 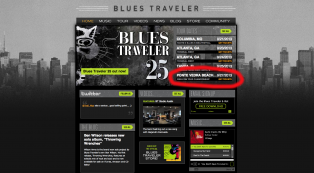 For many of us who were not really into the early 1990’s grunge music coming out of the Seattle area, the music scene was pretty boring. It was the era when the Cyrus “Empire” came into existence with Miley’s dad making a horrific hit country song titled “Achy Breaky Heart” and Country Music going mainstream.
Most of the sixties and seventies rock heroes were taking a leave of absence before regrouping in the early 21st century and the 80s heavy metal and hard rockers were licking their wounds from an excessive lifestyle in their heydays. Even Metallica had a hard time staying on speed.

Life summer concerts were the only worthwhile distraction in the music industry and following in the footsteps of the legendary cult band Grateful Dead’s dedicated touring schedule, Blues Traveler has lived up to its name implying living a nomadic life on the road. More than their studio albums, touring stints that last months at a time have earned the rock band notoriety. So while reading this, re-familiarize yourself with their work here and here.

The group started out by playing high school parties in the mid 80s, and its members insist they perform better onstage than in the recording studio. Blues Traveler, in fact, was able to maintain a loyal fan base throughout the late 1980s and early 1990s, despite their virtual nonexistence on the music charts. Blues Traveler’s aspiration was to be a jamband, always on the road, in the tradition of The Grateful Dead, the early Allman Brothers when Duane was still alive, Widespread Panic, Dave Matthews, Government Mule, Phish and so many more.

To paraphrase Wikipedia: The term Jamband – even though resented and rejected by many bands that fit the category (Ed).- references a rich palette of sounds and textures. These groups share a collective penchant for improvisation, a commitment to songcraft and a propensity to cross genre boundaries, drawing from a range of traditions including blues, bluegrass, funk, jazz, rock, psychedelia and even techno.
Blues Traveler produces an amazing range of genre’s, supported by frontman John Popper’s unworldly harp playing and songwriting. To sketch his stature correctly: He is widely considered a harmonica virtuoso, and is listed by the world’s leading harmonica manufacturer Hohner as a “Featured Artist”, an accolade reserved for only the best and most successful harmonica players.

The first time I listened (and spoke) to Popper in the early 90s in a New York Blues Club, he said he used the harmonica to mimick Jimi Hendrix and Jimi Page’s guitar playing. Listening to his harp playing this morning brings back those memories.

In early 1995 when the LP ‘four’ produced two Top 40 singles, “Hook” and “Run-Around” and catapulted the band into mainstream success and visibility, the jamband formula came under pressure for several years as the performance venues changed from open fields and stadiums to concert halls and theatres.
Personally I think ‘four’ is one of the best total content albums every recorded. It’s an album with no filler songs. All 12 songs are magnificent, and the album is certified as 6x Platinum (6 million copies sold in the U.S. alone). “Run-Around” won the 1996 Grammy Award for Best Rock Performance by a duo or group.
The album exposed the world to John Popper and friends. Popper, a superior singer, songwriter and harp player, managed to give the band it’s own sound, you know that sound that makes you immediately look up and recognize when it comes on the radio, yet managed to keep his feet solidly on the ground. Now 18 years later, the band still features the same musicians and is creative as ever.

Frontman, John Popper, spent most of his youth in Stamford, Connecticut, before moving to Princeton, New Jersey, when he was 15 years old. While attending high school, Popper discovered the harmonica and developed a reputation around Princeton High School as “that harmonica guy.” He decided to play the instrument in the Princeton High studio band where he met London-born drummer Brendan Hill.

In 1983 Popper and Hill put together the Blues Band. They played high school parties for money, sparking the attention of many of their schoolmates. Two years later, a Princeton High football, lacrosse, and guitar player named Chan Kinchla decided to jam with his classmates in the Blues Band. It turned into a marathon three-hour collaboration that became known as the “black cat jam.” The reference to the animal came about because a black cat wandered up after the band finished; Popper explained in Rolling Stone that the cat seemed “like it was going ‘whoa’ with us. Whenever we have trouble, a big event, a crisis of faith, or some milestone, there is a black cat there. This is the truth.”

In 1987, two years after the black cat jam, the trio met up with another Princeton High schoolmate, bassist Bobby Sheehan, who finalized the line-up of the Blues Band. When the band members graduated from high school, they moved to New York City to gain more exposure. Popper, Hill, and Sheehan enrolled in New York’s New School to study jazz. The band was soon performing in area clubs under the name Blues Traveler.

Shortly after they started playing clubs, Blues Traveler grabbed the attention of late concert promoter Bill Graham’s son David. Billy Graham immediately decided to become the band’s manager. (David would eventually take over after his dad’s passing in 1992.) With Bill Graham’s contacts and support, Blues Traveler signed a contract with A& M Records in 1989. By that time, they had performed live throughout the region and played 16 to 20 shows per month.

Blues Traveler had brought their own style of blues and 1960s rock-influenced music to the stage for several years, and in 1990 the band released their self-titled debut album. Describing Blues Traveler’s original brand of rock to Rolling Stone’s Elysa Gardner, Popper said, “If Muddy Waters was a white guy living in the suburbs in the late ’80s, he’d sound a lot like us.”

The following year, Jim Gaines produced the band’s second album, Travelers & Thieves. Their continuous live shows had resulted in many comparisons to both the Grateful Dead and the Allman Brothers Band. After the release of Travelers & Thieves, the comparisons increased with the live guest appearance of Gregg Allman on keyboards and backing vocals on the song “Mountain Cry.”

Blues Traveler had accomplished moderate record sales with very little promotion, mostly due to their relentless touring. But the band insisted that their style of music just worked better on the stage. “The best term for the Blues Traveler sound I’ve heard is ‘neo-retro,’” commented guitarist Kinchla in Guitar Player. “A lot of music has moved away from that feel of live interaction, so we’re getting back to music the audience can feel it’s part of.” Popper concurred, pointing out in Billboard, “We’ve always been predominantly a live band. Our studio albums are nice tries, but the live shows just totally blow them away.”

This commitment to live performance made Popper organize the first annual H.O.R.D.E. (Horizons of Rock Developing Everywhere) festival with the inaugural line-up including Blues Traveler’s high school friends the Spin Doctors, along with Phish, Widespread Panic, and Col. Bruce Hampton and the Aquarium Rescue Unit.

During the summer of 1993, Blues Traveler organized another H.O.R.D.E. festival and added another Grateful Dead comparison to its portfolio. The Grateful Dead had long been known to have fans, or “Dead Heads,” follow them from show to show, pretty much in the same fashion as Jimmy Buffett’s Parrotheads. Well Blues Traveler also found van loads of fans hot on their trail for a complete spring, summer of fall season; the group’s touring cavalcade came to be referred to as “Fellow Travelers”

The past two decades

The members of Blues Travelers, now multi platinum celebrities, have continued to be faithful to their nomadic lifestyle on the road, playing show after show to their “Fellow Travelers.” In the face of their mainstream stardom as a result of ‘four’s global success, the band was excited but insisted that they would not alienate their longtime cult fan base. Guitarist Chan Kinchla expressed the band’s views on fame in Billboard, “If it had happened sooner, I’m afraid that it would have changed us too drastically as people or shifted our musical focus. We are more grown-up now and can handle the pressures and demands that come with it.”

Asked why Blues Traveler for this Golf Event the organizers told me: With the Web.com Tour Championship making its debut on Dye’s Valley Course at TPC Sawgrass, the tournament wanted to offer fans a fresh take on the Friday night concert. We felt the Jacksonville market would truly appreciate Blues Traveler and seeing one of the best harmonica players in the world in their back yard. The stars aligned for our date and their availability, and the rest is history.

Please don’t call me this coming Friday afternoon September 27. I won’t be available. I’ll be standing on Dye’s Valley golf course at TPC Sawgrass to listen to one of my all-time favorite bands.

Tickets to the 4 day event that starts on Thursday are only $15 and can be purchased only at http://www.webtourchampionship.com/
Driving Directions