Although important problems exist, the growth fundamentals of the United States do not appear to have been permanently altered by the shocks of the past four years.- Ben Bernanke August 2010 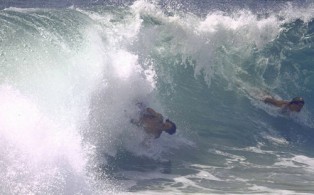 While walking the small sliver of beach that passing Hurricane Irene has confined us to, I look at some of the big waves that intensely reminded me of my youth and big wave body surfing in the North Sea. I also watched a surfer way out in the water, sitting on the board and analyzing the waves, which ones to go for and which one to ride out. Body surfing and board surfing require knowledge of the waves or else you get hurt or worse. If you ever got smacked down, air knocked out of your chest and water coming out of every orifice, you know what I mean. In order to avoid the potentially deadly beating the ocean is capable of delivering, you must learn to get in sync with the waves. That requires learning to look out to sea and being able to quickly assess which move to make next. Loosely speaking, those moves boil down to…(don’t mind if you replace the word wave with markets, if you get my drift)

• Making a modest adjustment in your position in order to intersect the wave at just the right point to catch it. Properly positioned, a couple of quick strokes and kicks allows you to tap into the rising force of the wave and enjoy the ride. Once the wave begins to collapse over you, a hard turn into its face allows you to pop out through the back of the wave unscathed and move back into position to catch another.

• Swimming to safety. On seeing a monster wave cresting too far out for you to catch a controlled ride, which means it is likely it will crash down on you if you stay where you are, you never swim for the false safety of shore – because you’ll never make it. Instead, you swim as fast as you can straight at the wave. Then, as the shadow of the wave towers over you, you dive for the bottom while continuing to swim toward the open sea.

• If you move quickly enough, the wave will crash harmlessly just behind you. But sometimes, if you are a bit slow, the wave may crash just ahead of you, at which point you have to open your eyes underwater in order to see and swim around the tornado-like columns of white water created by the crashing wave.

• Either way, once the wave has passed, you surface for air, take stock of the situation and decide on your next move… whether to try and catch the next wave or keep swimming toward the safety of deeper water.

• Move closer to shore. While the maximum excitement from the sport comes from riding the giants, there can be long lulls between sets of the larger waves. During those lulls, if you want to catch waves, you have to move closer to the shore, settling for shorter and less dramatic rides.

• Stay on shore. There are days following big storms when, as tough as we liked to think we are, swimming out into the surf can been pretty close to suicide. Therefore, staying on the beach is pretty much the only intelligent move to make. And, stating the obvious, people who don’t know how to swim or who are prone to panic when splashed in the face should as a matter of policy stay out of the water entirely.

And this brings me to Ben Bernanke’s comments yesterday – I don’t think anyone could call it a speech – in which he offered no promises, no stimuli, just a nod to congress to get on the ball and a personal observation that said: “With respect to longer-run prospects, however, my own view is more optimistic. As I will discuss, although important problems certainly exist, the growth fundamentals of the United States do not appear to have been permanently altered by the shocks of the past four years.”

Please recall that this same man said exactly one year ago in August 2010:

“The financial crisis appears to be mostly behind us, and the economy seems to have stabilized and is expanding again.” In that speech, Bernanke signaled that the Fed would begin a new round of Treasury bond purchases to try to lower long-term interest rates, spur spending and boost the stock market. His words ignited a 28 percent, eight-month rally in the Dow, but the economy did obviously not catch on. This time, Bernanke merely repeated that the Fed “has a range of tools that could be used to provide additional monetary stimulus.” Besides a third round of bond purchases, there is however not a whole hell of a lot the Fed can do.

Going back a bit further to the beginning of the sub-prime disaster in May of 2007 Big Ben gloriously uttered: “Given the fundamental factors in place that should support the demand for housing, we believe the effect of the troubles in the subprime sector on the broader housing market will likely be limited, and we do not expect significant spillovers from the subprime market to the rest of the economy or to the financial system. The vast majority of mortgages, including even subprime mortgages, continue to perform well. Past gains in house prices have left most homeowners with significant amounts of home equity, and growth in jobs and incomes should help keep the financial obligations of most households manageable.”

We all know what followed, yet, for some reason that escapes me entirely, investors are still waiting for his gospel of wisdom, hoping for a sprinkle of additional stimulants, and when he intentionally fails to deliver that message, they see it as a nod to go ahead and buy the market up another 134 points. Creepy is all I can say.