Bounty Momma Always Gets Her Man

This reality parody brings the viewer inside the day to day of a dysfunctional family business that turns otherwise mundane bounty escapades into mayhem and madness. 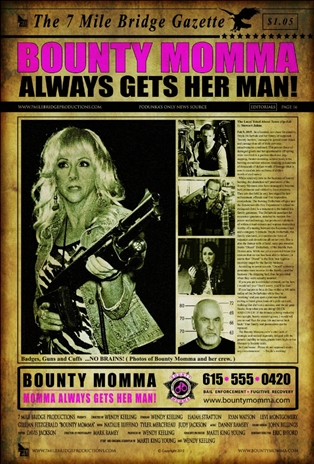 Actress, Director, and Producer Wendy Keeling will be traveling from Nashville, Tennessee, to Amelia Island this week for the Rendezvous Film Festival being held in Fernandina Beach June 2 – 4, 2016. Starring in the film, “Self Offense”, she attended last year’s festival and looks forward to returning for the entire festival this year.

Her new project is directing and starring in, “Bounty Momma“, an award winning web-series. If Reno 911, The Beverly Hillbillies, and Dog the Bounty Hunter had a love child it would probably be Bounty Momma! The pilot episode will be screening at the Rendezvous Festival.

Here is the description:
The bounty hunting world will never be the same under the watch of hot tempered redneck momma Twyla Sue Dollarhide and her dim witted family. Twyla Sue Dollarhide, aka “Bounty Momma”, is a no-nonsense southern firecracker with a reality show who, despite the incompetence of her gun toting lamebrain family and film crew, proudly boasts that she “always gets her man”! This reality parody brings the viewer inside the day to day of a dysfunctional family business that turns otherwise mundane bounty escapades into mayhem and madness.

Another project of Wendy’s is “The Unconventional Gourmet” scheduled for a Midnight Screening on June 3, 2016, at Halftime Sports Bar and Grill located at 320 South Eighth Street.

This award winning dark comedy short film is about a woman stuck in the 50’s searching for the perfect ingredients in an unusual family recipe. It is a twisted modern take on a well known fairy tale.

Here are the reviews for this short film:
A short film that’s not short on creativity. It’s edited beautifully drawing the viewer in, with captivating cinematography and content.”
Kimberly Michele Durham
KCheleMagazine.com

Here is the trailer:

For more information about the Rendezvous Festival, please visit: www.rendezvousfestival.org/.