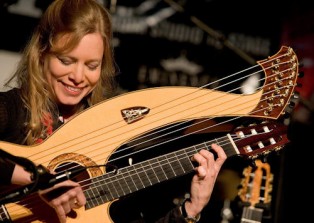 Type in the name Muriel Anderson in the Google Browser and there are 50 or so pages completely devoted to the musical accomplishments of this guitarist/composer. And the big news… Muriel Anderson is coming to Amelia Island for a Benefit Concert for the Boys and Girls Club on February 2nd at the Golf Club of Fernandina Beach.

I often indulge in ‘Googling’ as to get a better understanding of a specific topic or measure the level of fame of a person. Well Muriel Anderson is famous. And looking at several of her many youTube videos, she darn well deserves to be famous. This petite woman has no less than 15 CDs, 9 video DVD’s and a load of highly accomplished instructional books on how to play various guitar styles. From Blue Grass to Flamenco to magnificent classic guitar, she was the first female winner of the National Fingerstyle Guitar Championship in 1989 and has grown ever since into a virtuoso in many different styles, which was recognized when she was named best classical guitarist by Acoustic Guitar magazine (reader’s choice) in 2009. Besides she also is an expert on the harp-guitar.

The Concert at 7:30pm is free, but donations for the Boys and Girls Club are suggested. There will be a Muriel Mini Concert after the Best Ball Golf Tournament between 11:30 and 4:00 PM that day. 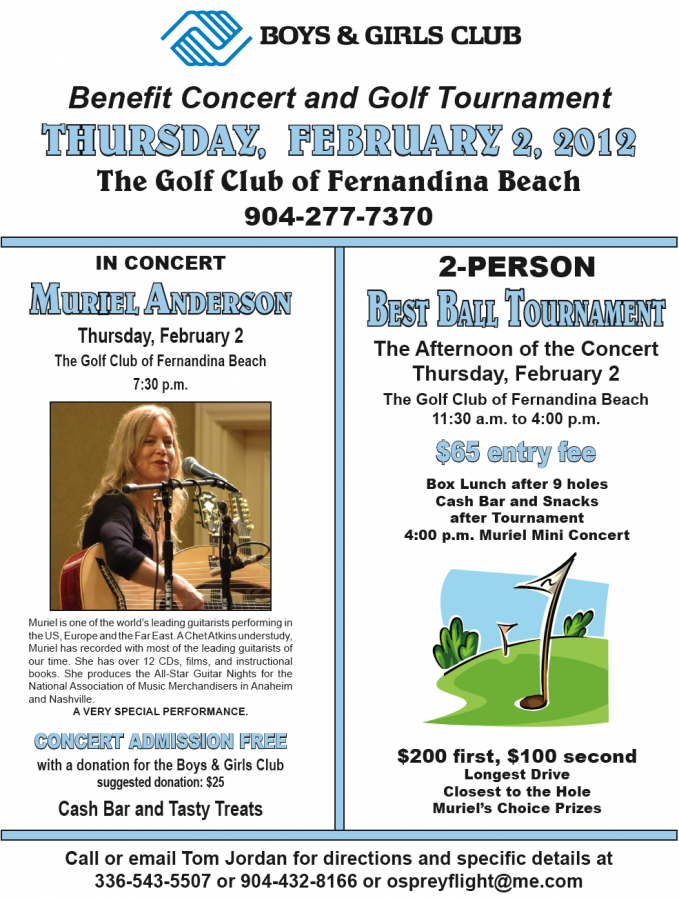 The Boys and Girls Club have an exciting time ahead in anticipation of the opening of their new facility on Lime Street in Fernandina Beach, which is currently under construction. On February 24 the 5th Annual Benefit at the Ritz-Carlton, Amelia Island will feature National Speaker Extraordinaire Bonnie St.John, but more about that at a later day.

For now all eyes are on February 2nd and Muriel Anderson. If just every guitar player on this island, and I know there are numerous ones including myself, will mark this day and time in their agenda, the Fernandina Beach Golf Clubhouse will be filled to capacity and the Boys and Girls Club will be one major step closer to a well needed facility.

Make an effort to join in on one or both of these great events for a great cause.