Canaries in the Coal Mine

The Canary in the Coal Mine dies to point out the imminent danger. The economy has a flock of canaries caught in a coal mine. 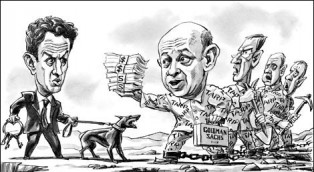 Tiny Tim and the Singing Canaries

Lately I have been hearing that expression a lot. I have intimated in the past that I grew up in the coalmine hills of Holland where my dad was a financial controller for the Dutch State Mines. In the 1950s we even had canaries at home, although dad never went down in the mines.  For those of you not familiar with the expression:  Early coal mines did not feature ventilation systems, so miners would routinely bring a caged canary into new coal seams. Canaries are especially sensitive to methane and carbon monoxide, which made them ideal for detecting any dangerous gas build-up. As long as the canary in a coal mine kept singing, the miners knew their air supply was safe. A dead canary in a coal mine signaled an immediate evacuation.

These days the expression is used for about any situation that requires non wavering attention as we plan to avoid disaster, while the variety of symptoms are so easily overlooked.
The Global Economy for example has a flock of canaries currently still whistling a tune, but maybe not for long. Countries such as Greece and Dubai, followed by Italy, Ireland or even on this side of the Atlantic.

“Official” numbers again and again are heralding how the consumer is proving to be the upside surprise for the first quarter of this year. Many media and economists are calling for 4.0% real PCE growth, which would indeed be impressive, if not for the following canaries in the coal mines:
• organic wage and salary income is still on a downward path.
• the consumer is fuelling the spending pickup via a renewed decline in the savings rate, to near-depleted levels of 3%, which is what we would dub a “low quality” recovery.
• Tax refunds are up double digits from a year ago, which is a non- recurring source of support as well.
• at least six million American households are no longer paying their mortgage and are living for free in their home because the banks don’t want to evict them and become a reluctant landlord or have to bite the bullet and write down the value of the property on their books.  Right there we have a situation where at least $100 billion of consumer cash flow that has been freed up for fun and games in the name of strategic mortgage defaults.

Don’t forget the 700,000 cars that were in the cash for clunkers stimulus program as well as the current cash for clunker appliances program and the first time home buyer allowance all make the regular market forces artificial and give a skewed number picture.

As a result any of these canaries can at any time drop dead in their cage and that fact alone can hardly be called a sustainable underpinning of a longterm recovery and worse, hardly a positive force for banking-sector interest income. Goldman Sachs is a canary the size of a condor or better yet Albatros, a millstone around the neck of a warped financial system that is looking at a complete regulatory overhaul, even though the White House intentions are somewhat half hearted at this point.

Yes the canaries have seemingly bought us a little time, but I think it’s the work of a magician replacing dead birds for live ones, when we are momentarily distracted. These are breathing spaces created out of thin air. How poisonous that air really is, will be revealed when canaries start suffocating.

And having said that, I think using the expression this way is actually riddled by optimism as another part of the ideology implies that canaries being used as unwitting subjects to test the potential risk, solely for the benefit of others. The Goldman Sachs case might just point a finger into the direction of the mine’s exit.