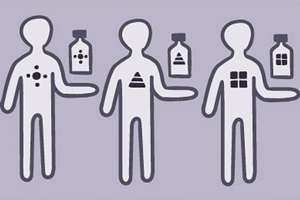 Last year more than 1.7 million people were diagnosed with cancer in the United States. Cancer can be difficult to treat because each tumor is unique. Scientists are now gaining a better understanding of the changes that lead to cancer and figuring out how to target them for personalized treatments.

“Cancer treatment is changing at a very fast pace,” says Dr. Patricia M. LoRusso, an NIH-funded cancer treatment expert at Yale Cancer Center. “What somebody got a year ago may not necessarily be the same treatment recommended for another person today.”

For decades, doctors have treated cancers based on where a tumor first started, such as in the lung or colon. But often, a treatment that works well for one person doesn’t work as well for another.

Research has revealed that each tumor has a unique combination of genetic changes. Cancer is caused by changes in genes that control the ways cells grow and survive. The cells begin to divide without stopping. They form growths called tumors, and some spread to other parts of the body.

The genetic changes that cause cancer are most often from exposure to sunlight, tobacco, and other things in the environment that can damage genes. But some cancer-causing genes can also be passed down from your parents.

These insights have led scientists to look for the unique genetic features of each person’s tumor and then attack those specifically.

“Many times, we’re trying to turn off certain pathways in the tumor that are activated and that cause it to continue to grow,” LoRusso says. This type of treatment is called “targeted therapy” because the drugs target the specific changes in cancer cells that help them to survive and spread.

Doctors can now send a sample of the tumor to a lab to identify important genetic changes. The doctor can then match the unique changes with the treatment that is most likely to help.

“There are several drugs that are now on the market that have made a huge impact in the treatment of several types of cancer,” LoRusso says.

Genetic testing isn’t available yet for many types of cancer. NIH-funded studies are looking for ways to develop targeted therapies for more cancer types.

Cancer treatment is changing very quickly. Ask your doctor about the newest treatments for your type of cancer.