An ounce of prevention is worth a pound of cure is good advice when it comes to hurricanes, floods and now space storms forecasted for 2013 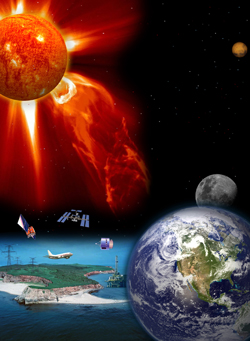 In the way of solar harm?

Not only are we to worry about weather on earth, says NASA, we are facing a catastrophic solar superstorm that will hit Earth sometime in 2013 with unprecedented levels of magnetic energy from solar flares.

Earth and space are about to come into contact in a way that’s new to human history, says scientists at NASA, claiming that the super storm could hit like ‘a bolt of lightning’ and could cause catastrophic consequences for the world’s health, emergency services and national security. Damage could extend beyond satellites and air traffic to everyday items such as home computers, iPods, GPS and sat nav systems.

‘We know it is coming but we don’t know how bad it is going to be,’ said Dr. Richard Fisher, the director of NASA’s Heliophysics division. ‘I believe we’re on the threshold of a new era in which space weather can be as influential in our daily lives as ordinary terrestrial weather.’ Fisher concludes. Here is more to the story that “leaked” from a June 8 meeting at the National Press Club.

Many technologies of the 21st century are vulnerable to solar storms.

Richard Fisher, head of NASA’s Heliophysics Division, explains what it’s all about.
“On April 19, 2010, NASA’s newest spy in the sky, the Solar Dynamics Observatory, witnessed one of the most massive eruptions in years. Earth was not in the line of fire … this time. The sun is apparently waking up from a deep slumber and in the next few years we expect to see much higher levels of solar activity,” says Fisher. “At the same time, our technological society has developed an unprecedented sensitivity to solar storms. The intersection of these two issues is what we discussed at that meeting.

The National Academy of Sciences apparently framed the problem two years ago in a report entitled “Severe Space Weather Events—Societal and Economic Impacts.” It noted how people of the 21st-century rely on high-tech systems for the basics of daily life. Smart power grids, GPS navigation, air travel, financial services and emergency radio communications can all be knocked out by intense solar activity. A century-class solar storm, the Academy warned, could cause twenty times more economic damage than Hurricane Katrina which in today’s dollars would be an easy $1.5 trillion dollars.

Yet much of the damage can be mitigated if managers know a storm is coming. Putting satellites in ‘safe mode’ and disconnecting transformers can protect these assets from damaging electrical surges. Preventative action, however, requires accurate forecasting—a job that has been assigned to NOAA. 2010 marks the 4th year in a row that policymakers, researchers, legislators and reporters have gathered in Washington DC to share ideas about space weather.

Fear is not the answer, preparation is.

I would like to be prepared as good or better than the next person, and frankly we already have enough scares and fears on our plate to deal with. I can see policymakers and scientific researchers gather around a table in Washington and kick around the potential fall out of these superstorms, so they can give us a heads up when one comes close enough to kick our laptops out of service, but the attendance of the press in my opinion is rather alarming considering their flair for the dramatic and the need to install fear in large numbers of topic uneducated civilians, who in turn will translate the warning into a slogan on a sign that says: “Repent, the end is near!”