Apparently the consumers aren't reading the papers. Don't they know a recovery is underway? 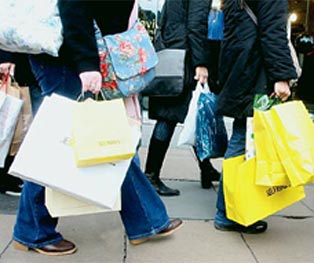 Those were the days of unruly shopping my friend

“Those damned consumers and their whiny confidence readings!” the Feds are cursing. Sentiment dropped to its lowest in three months, according to the Reuters/University of Michigan preliminary index. Apparently the consumers aren’t reading the papers. Don’t they know a recovery is underway?

After all, the S & P finished up for a second straight week, higher by around 2.5% since Monday’s open. The markets are 60% above the 12-year low set back in March, and within a whisper of recouping half the losses since they fell from their 2007 records.

“What’s not to be confident about?” the Feds wonder – incredulous that foreclosed families are not wearing a recovery smile. They point out that the banks are back to lavishing record-level bonuses on their top brass… trading desks are wheeling and dealing again… everything under the sun is worth more (in dollar terms) than it was a few months ago… AND, unemployment is still a few percent lower than Estonia’s record high…

Despite all this “good” news, those damn consumers are trying to pay down their debt. They’re ¬†spoiling the party!

If our unemployed brothers and sisters read the paper they would know that true economic recovery – the sustainable, nation inspiring kind – only comes from plasma television lay-aways and gratuitous Visa purchases at the individual level. That’s what their government expects of them.

But the individual is not like his government. He cannot amass exorbitant debts and then simply print off the money in his basement to repay them. If the Feds catch him in the act, he is charged with counterfeiting and sent to the slammer. The Feds feel currency debasement is their racket alone. To them the printing press seems to erase the pain of real world economics.

But such na√Øve thinking is truly dangerous, and dangerously untrue. It leads arrogant politicians to think that “deficits don’t matter,”

The citizens of Bailout Nation expressing some fear about their financial future is no surprise. Given the spendthrift nature of their government, any skepticism must be viewed in a complimentary light. Contrary to popular political opinion, Chinese people don’t make the world’s toys for free. One day those workers are going to start demanding what they’re owed and they won’t take it in beads and mirrors anymore. They may not even want the weakening greenback.

So yes… I‚Äôm worried too.