In 1861, the 155 mile Florida Railroad connecting Fernandina Beach to Cedar Key was completed. Next month marks the 150th anniversary. 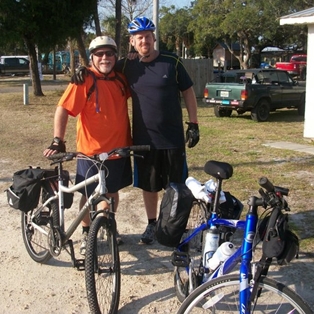 Pirates Peddle for a Purpose

In 1861, the 155 mile David Yulee Levy’s Florida Railroad connecting Fernandina Beach to Cedar Key, Florida was completed. The first train arrived on the dock at Cedar Key on March 16, 1861. This spring marks the 150th anniversary connecting the East Coast of Florida to Florida’s West Coast.

To mark this historic occasion, a group of cycling pirates from the Cedar Key Pirates in Paradise will leave Fernandina Beach on March 16th and average 50 miles a day retracing the tracks to Cedar Key.

Following the original route as closely as they can, they will travel through the towns of Callahan, Baldin, Starke, Waldo, Gainesville, Archer and Rosewood with the group completing their three day journey by arriving in Cedar Key at noon on Saturday.

This Pirates group is still in their infancy at only four months old, but they are doing what Pirates do best by finding a couple of charities and implementing a fun way to raise money. “Cedar Key Pirates in Paradise Peddling for a Purpose” is collecting pledges, or wagers on whether they will finish the ride or not.

Spearheading the ride are John Hadden and Bobby McCabe. Cyclist and Pirate McCabe told me, “We will arrive on Dock Street where the Pirates are having our Treasure Hunters Rummage Sale fundraiser. Our charities are the Cedar Key Food Pantry and the Wounded Warriors Project.”

Here in Fernandina Beach, the city is officially recognizing the anniversary at the March 1st Commissioner Meeting by presenting a Proclamation, “PROCLAMATION – 150TH FLORIDA RAILROAD ANNIVERSARY – Proclaims 2011 as the year of ‘The 150th Florida Railroad Anniversary’,” to Phyllis Davis, Executive Director of the Amelia Island Museum of History.

If you would like more information about the ride, would like to make a donation or simply grab your bike and join them, visit their FaceBook page to learn more.

Don’t worry if you miss the Cedar Key Pirates in March, they will be returning the end of April to participate in the Isle of Eight Flags Shrimp Festival’s Pirate Parade. This annual parade gets the Shrimp Festival festivities started and our noisy band of Fernandina Pirates hand out beads and pirate hats while they bring up the rear of the parade firing cannons and black-powdered weapons from their street-worthy parade ship, Amelia’s Revenge!